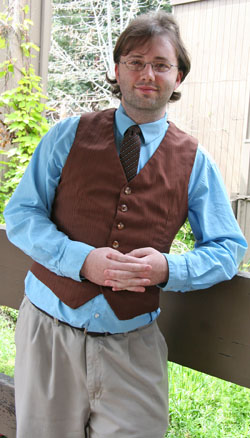 Jason Cherry is a typical community college student, in that he is anything but typical.

He was born and raised in Santa Cruz, and completed the California High School Proficiency Exam in 1999.

“My mom encouraged me to take a year off, without school always in the background,” he said. “It was a nice time, very relaxing, but not very productive.”

He started on his long and winding road in higher education at Cabrillo College in 2000, majoring in astrophysics. A year later, he left to live in Walnut Creek, and in 2003, enrolled at Diablo Valley College to major in art digital media-3D animation. Since he first moved to Walnut Creek, he has lived in Pleasant Hill, Pittsburg, Dublin, and currently lives in Concord.

“This was very much the ‘finding myself’ period of my life,” Jason said. “I honestly wasn’t a very responsible person at the time. I was, for the most part, living off my girlfriend, and didn’t really start to get my life together until 2005, when I started working at DVC.”

Jason was first employed at DVC in the fall of 2005 as a lab technician for the Art Digital Media program. In the fall of 2006 he started work as a part-time hourly in the Applied and Fine Arts division office, and in July 2007 became the secretary, a permanent classified employee. He is currently in that position.

“In 2005,” Jason said, “I had my first chance to get some professional experience doing graphic design work, and absolutely hated it!  But I had already taken most of the core classes and electives for the program, so I decided to finish my AA degree, as I’d need the general ed courses anyway.”

In 2006, he decided to major in psychology and started taking classes at John F. Kennedy University concurrently with classes at DVC. Then, in the process of completing his AA, he developed an interest in the social sciences. “The courses I took in the spring of 2007 changed my whole academic orientation,” he said.

Jason earned his AA in art digital media in spring 2008. By 2009, now taking classes fully at JFK University, he decided that he wanted to study more along the lines of sociology, and changed his major at JFK to social ecology.

“Near the end of 2009,” he said, “I locked down my academic interest to studying non-monogamous families. I entered JFK’s bachelor’s program in social ecology.”

In the spring of 2011, Jason narrowed his focus to studying inequity between monogamous and non-monogamous families within policy and law.

“I completed my senior project for my Bachelor’s degree with a study on how existing laws bring inequity and unfair treatment to non-monogamous families,” he said. “I also started a blog that I have been keeping updated with my continuing research on these issues.”

He completed studies and earned his B.A. degree in social ecology from JFK University in September 2011. Since that time, he has been taking classes at DVC and one at JFK “to patch a few holes in my education, prior to graduate school,” he explained. These include economics, mathematics, statistics, marriage and family studies, and legal studies.

In the summer/fall of 2011, Jason said, “My senior project was added to the Polyamory Collection at the Kinsey Institute at Indiana University, and I was also asked to present at the Public Anthropology Conference at American University, Washington, DC, in a panel on society and non-monogamy.”

Recently, Jason was accepted into Brandeis University’s (Waltham, MA) Master in Public Policy program, which he will start at the end of August.

“I am still employed as the Applied and Fine Arts division secretary, and will continue to be through August 21 of this year,” he said. “The next morning I get on the train heading for Boston.

“I would say, first and foremost, that DVC has been absolutely pivotal in developing me as a person,” Jason said. “My first semester here I enrolled in Tae Kwon Do taught by Arnoldo Bolanos. I stayed in the class for subsequent semesters, eventually capping out my repeats. Though my academic classes were important, it was Tae Kwon Do that really taught me discipline and responsibility.  The values I learned through this class serve as the moral backbone I live by today.

“As a student,” he continued, “almost every instructor I have had has been extremely encouraging of my interest in the course material. More frequently than not, I would chat with my instructors after class for quite lengthy times, and they were always supportive and encouraging of my questions. This helped motivate me and encourage me to really learn the material, and not just memorize facts for an exam. For me, the best resource at DVC has always been the faculty themselves.”