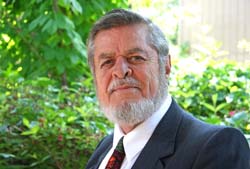 Dr. Amer Araim, part-time instructor at Diablo Valley College, works to build bridges between the American Muslim community and other communities, and to promote peace and harmony. He wrote a book, Understanding Islam: Fifty Questions to help initiate dialogue.

Araim is originally from Iraq, where he graduated from Law College and then joined the Foreign Service. He came to the United States in 1966 to work as a diplomat in Washington, D.C., and then returned to Iraq. From there, he was assigned in 1968 to New Delhi, India, and in 1973 became a counselor to the Mission to the United Nations. While in that post, he continued studies for a master’s degree in Government and Politics, writing his thesis on “Legal Aspects of Decolonization in the United Nations.”

He resigned from the Foreign Service in 1978, and moved permanently to the United States to work for the United Nations Secretariat, which he did until 1999. During that time he continued studies for his doctorate degree in political science, which he earned in 1989. After 1999 he began teaching at Long Island University and Dowling College. He came to the Bay Area in 2001 and since then has been a resident of Walnut Creek.

While working with the United Nations in various positions, Araim worked on decolonization, ending apartheid, and promoting democracy in Africa.

“The audience, including leaders of the interfaith community, were impressed with my statement, and began inviting me to their congregations to speak about Islam, my position in condemning the terrorist attacks of 9-11, relations between the United States and the Muslim world, as well as other questions,” Araim continued. “DVC and San Francisco State University also invited me to speak. Student groups, labor unions, women’s groups, and other social groups began inviting me and asking me questions about Islam. There were many questions. I collected 50 questions and my answers to them are now in this book. I added introductory remarks and basic information about Islam, and in 2010, my book was published by Big Hat Press of Lafayette, CA. A new edition was recently published.”

In 2008, Araim and a group of friends from the Bay Area established the Islamic Community Outreach of California, with Araim as its president.

In 2003, Araim was invited to teach Politics of the Middle East at Diablo Valley College. He taught the same course in 2005, and since then has taught other courses, including Introduction to Politics, American Government and Politics, and International Relations, as well as Political Theory. Since 2009 he has served as adviser to the DVC Model United Nations Club, and for the last two years has been adviser to the DVC Muslim Student Association.

What does he hope his book will accomplish?

“From the beginning, I wanted to build bridges. My theme has always been that American Muslims are an integral part of the American society. What hurts America hurts Muslims too. I want people to understand that Islam is the continuation of Monotheism, and Muslims attach great respect and devotion to the principles and teachings of all the prophets and messengers including Abraham, Moses, Jesus Christ and Muhammad. Muslims are cooperating with all faith groups to help the poor and the needy, and to ensure that peace and harmony prevail in the United States and all over the world.”

Among the misconceptions he is striving to clear up: that although God has many different names throughout the world, we all worship one God; and that Islam does not support violence, and those who live in the United States should respect the law.

In conclusion, Araim said, “The book is available at amazon.com and the DVC bookstore. More than 10 years after 9-11, and three years after initial publication of the book, I am still receiving invitations to introduce and autograph the book and to engage in a dialog about Islam. It really is a very encouraging experience to continue this work and dialog.”