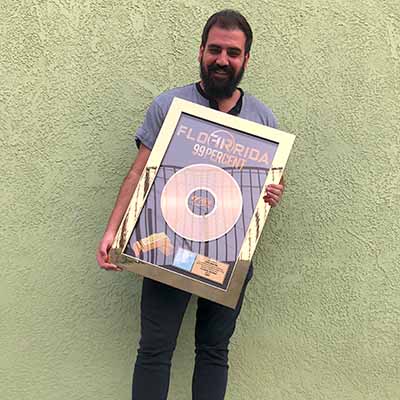 Cade Wolter’s initial interest in music and songwriting was just the beginning of what is now a highly successful career. He credits DVC as a vital stop along his journey in the music industry.

As a music industry studies major at DVC with an interest in songwriting, Cade was eager to learn in a way that fit his lifestyle. “As I was just getting started in music, my schedule was quite busy and erratic. DVC provided the flexibility I needed to pursue the classes I wanted without disrupting my professional pursuits.”

While at DVC, Cade gained an understanding of the industry and current trends facing his profession. “There was so much I didn't know about how things worked or how to progress, so getting to learn from teachers who could open a window to so many things gave me a major advantage and reference point.”

“Michael Aczon and Jon Bendich were teachers who led my Music Industry and Songwriting classes. They taught me so many things that I still actively use today. And they became mentors who offered advice years later. Truly invaluable educators.”

Those early days at DVC made a major impact on Cade’s career. “I continued working in entertainment during my time at DVC and the following years. I manage songwriters and producers now. I have done deals with all the major labels and publishers. My clients have amassed billions of streams in a wide variety of genres, garnered Grammy and Emmy nominations, and have earned multiple gold and platinum certifications.”

And Cade’s success doesn’t stop there. “My first Top 40 and Gold certified single was "Cake" by Flo Rida & 99 Percent, which I worked on with fellow DVC student Kell Egan. Our team has songs on multiple UK number 1 albums this year including with Elton John. It was incredible working with such a legend. We've had songs on multiple international ad campaigns and across film, tv, and other media.”

What advice does Cade have for prospective and current students? “DVC was a wonderful resource for me. Whether you are working towards a degree or just want to learn more about subjects that interest you, having an affordable local option filled with all sorts of diverse lessons is just amazing. It was a vital stop in my music journey.”