Twenty DVC students participated in two Chinese language competitions held recently in San Francisco, and when they were over, DVC student Harold Speer was a big winner.

Speer won the beginner's first place in the "Chinese Bridge" Language and Performance Competition, which was held May 3 at San Francisco State University.

This seventh annual competition was hosted by the Confucius Institute at San Francisco State University and co-sponsored by the Consulate General of the People's Republic of China. Speer's prize was a scholarship to study in China.

Twenty students from DVC participated in the 33rd annual Chinese Speech Contest of California held April 26 at Lowell High School in San Francisco, and brought back eight awards. Begun in 1962 by Professors K. Y. Xu, Leo Chen and Maurice Tsen of San Francisco State University (SFSU), the contest-which has evolved into the present day Mandarin speech contest- is open to all Bay Area Chinese language students, from elementary to university level. It is the largest speech contest of its kind in the country, and this year drew 680 students from 36 schools, colleges and universities throughout California. 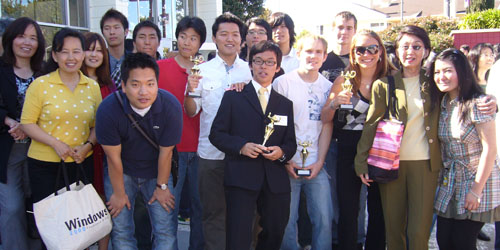 According to DVC professor of Chinese Sheree Lin, Chinese is now one of the most popular languages to learn. DVC offers CHIN 120, 121, 220 and 221, and in Fall 2008 will also be offering an online beginning CHIN 120 class.