Pre-Apprenticeship: Fast-Track Your Career in the Building Trades

“If you aren’t afraid of hard work, would like to get raises every six months as an apprentice, plus have a pension that enables you to retire at 55, consider a career in the building trades,” said Joe Valdez, Department Chair of Architecture, Construction Management, Electronics, Engineering and Machine Technology. 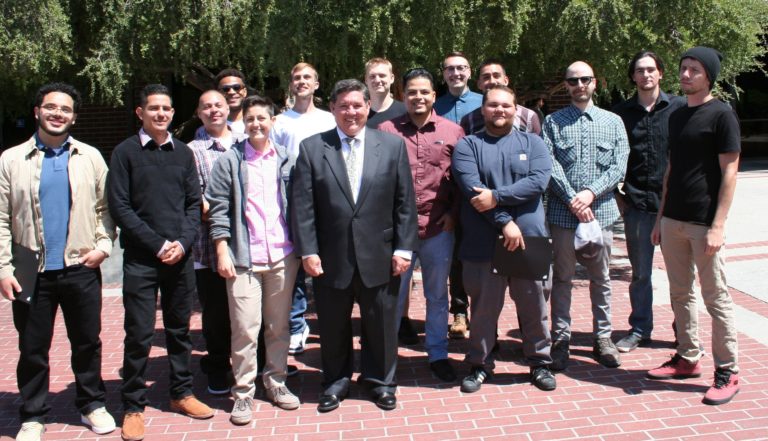 “But for students who complete the pre-apprenticeship program, we are seeing a 95 percent pass rate on the apprenticeship exams. Some pass more than one exam enabling them to choose between apprenticeships. And 85 percent of our graduates succeed at getting into a trade,” said Valdez. “Our first group of students completed the program six years ago and some are now journey-level.”

Is pre-apprenticeship right for you? 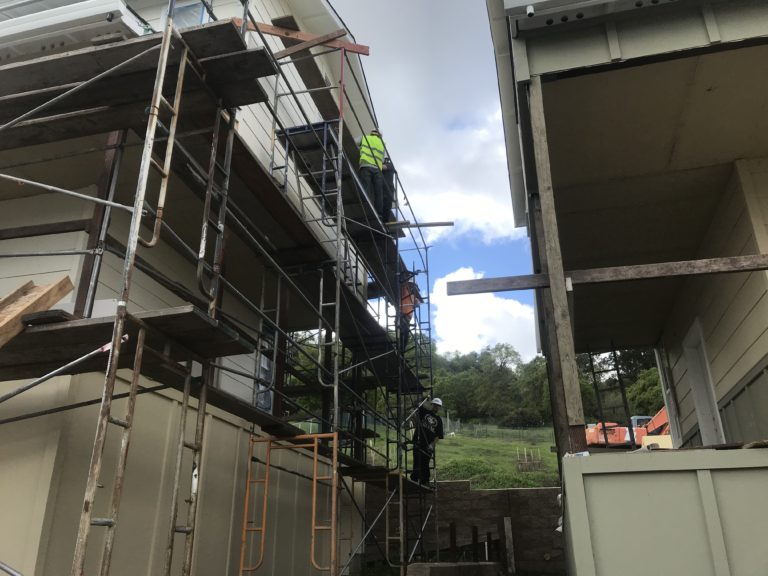 The DVC Pre-Apprenticeship program is designed for career-focused students interested in one or more of the building trades. If you are ready to work hard both in school and on the job, this fast-paced program might be exactly what you are looking for.

Pre-apprenticeship students at a job site“Typically, successful students in this program are motivated self-starters who are able to get up early, work hard and follow directions. That requires a certain amount of maturity,” noted Valdez. “Students find their efforts are rewarded when they complete the program, pass an apprenticeship exam and are able to earn $18.00 to $27.00 an hour starting pay plus benefits.” Pre-apprenticeship students receive training that prepares them for exciting careers across the spectrum of building trades, including:

“The building trades offer great careers for women with strong wages and a clear path for advancement. Unions are really receptive, and the faculty and students in the program are really supportive. I would definitely recommend the pre-apprenticeship program to female students,” said Valdez.

How does the pre-apprenticeship program work?

The 21-unit pre-apprenticeship program is offered each spring. Students are advised to enroll in all classes, enabling them to complete the entire program in just one semester. The required classes include: 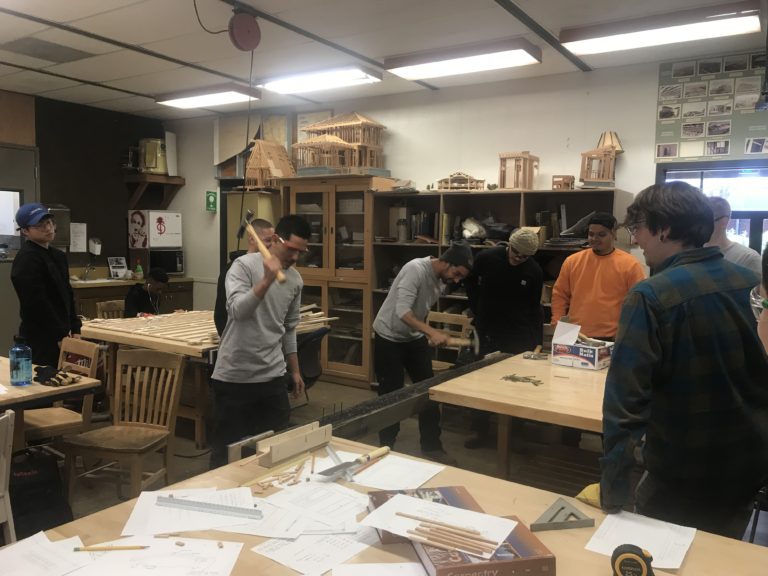 Upon completion of the program, students receive a certificate of achievement. In addition, students may be able to receive priority status into the Carpenter Training Committee for the Northern California Pre-Apprenticeship program.

“The job market is booming for the building trades right now. But even during an economic downturn, people still need plumbers, electricians, and HVAC technicians. And since students who complete these programs are typically joining a union, they will enjoy the greater protections that a union brings, including higher wages and benefits,” commented Valdez. “If 85 percent of our graduates are getting into a trade when they complete this program, the program is doing its job,” said Valdez.

Careers in the building trades:

Erick Cordova, April Gustavus and Marcus Roberson all are proud graduates of the DVC Pre-Apprenticeship program, and each has a story to share. 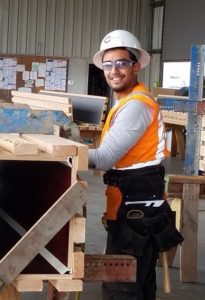 Erick Cordova began his college career as a business management major at DVC and then changed his major to sports management. After struggling in several science classes that were required for the major, Cordova decided to consider other options. He attended the orientation for the pre-apprenticeship program and decided to enroll.

“I was convinced that there was not a better time to start a career in the trades, especially here in the Bay Area where construction is booming and only getting better,” said Cordova.

“As part of the pre-apprenticeship program, we visited local unions all around the Bay Area, including plumbers, carpenters, sheet metal workers and operational engineers. Through that experience, I was convinced I wanted to become a carpenter because I loved the idea of building things from the ground up. And the entry-level wage of about $28.00 an hour had a hand in persuading me too. The program did a great job in preparing me to get into carpentry because we not only got to build our own little model home from the foundation of the house all the way up to the roof, but we also volunteered for Habitat for Humanity, helping to build affordable homes for those in need,” said Cordova.

Cordova will be joining the Carpenters Local Union 152. He credits the pre-apprenticeship program for his success.

“My time at DVC meant the world to me. I got a great education from amazing instructors as well as the skills I needed to get into the trades. The opportunities are endless. Without DVC’s Pre-Apprenticeship program, I can honestly say I don’t know where I would be today,” said Cordova. 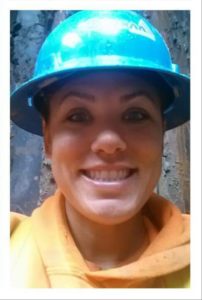 April Gustavus heard about the pre-apprenticeship program from her mom who brought her a flyer about orientation for the program in 2012.

“I thought to myself, ‘Wow, this looks like something I could really be interested in!’ I attended the orientation and was immediately all-in. I signed up that day and was in the first cohort for the pre-apprenticeship program. I’d always wanted to join a union. I became a union carpenter and started off making $24 an hour plus benefits after three months. The starting wage in 2018 is $30+ per hour with benefits after three months,” said Gustavus.

Gustavus completed the pre-apprenticeship program six years ago and still works for the same company that hired her after she graduated.

“I’m doing some seismic retrofitting at Kaiser Permanente in Walnut Creek. I am the foreman on the job and am also mentoring another female student who just went through the pre-apprenticeship program. It’s pretty cool to see everything come full circle,” said Gustavus.

The pre-apprenticeship program offers an outstanding career opportunity for women interested in working in the trades.

“I was one of two female students in my class back in 2012. I definitely would say I was supported. The reason I pursued a ‘non-traditional career’ was mainly the pay and the equality. I wanted a career with really good benefits, retirement and of course a better hourly wage. I am proud to say I’m a delegate in my union,” said Gustavus. 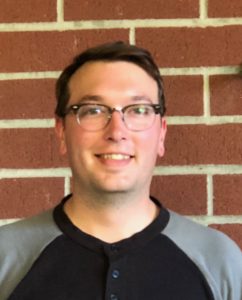 Marcus Roberson enrolled in community college after graduating high school, but struggled in his classes. Six years later, with many of his friends already graduated from college, he decided to return to school.

“I was at a dead-end job with no career in mind and because I’ve always liked working with my hands and working outside as opposed to an office job, the pre-apprenticeship program offered a fantastic opportunity,” said Roberson.

“I decided I wanted to weld, so I tested into the Plumbers and Steamfitters Union Local 342 as a pipefitter, which will ultimately lead to welding. As a first period pipefitter apprentice, my starting wage is $25.04 per hour and it increases every three months for the next five years,” said Roberson.

“I was recently dispatched to work at the Chevron refinery in Richmond, and I absolutely love it. The pre-apprenticeship program offers an outstanding opportunity to not only kick-start a well-paying career, but also to gain knowledge and skills that will be useful the rest of your life,” said Roberson.