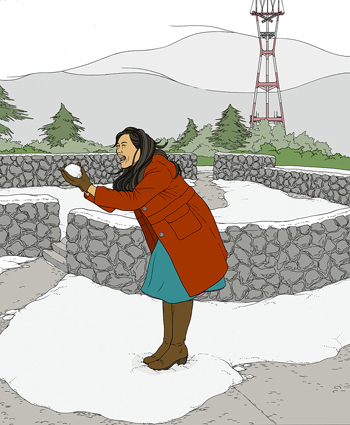 Jenifer Wofford, a part-time art instructor at Diablo Valley College currently teaching the ART 105 course, is an internationally-exhibited artist, and starting this month is showing her work in Hong Kong and two San Francisco shows.

The first exhibit, Galleon Trade: Bay Area Now 5 Edition, opened September 4 at the Yerba Buena Center for the Arts (701 Mission Street at 3rd) in San Francisco, and will run until October 19. It features five Bay Area artists paired with five artists from Manila; Wofford is curator for this show.

Taking the historic Acapulco-Manila galleon route as a metaphor of origin, the Galleon Trade exhibitions seek to create new routes of cultural exchange along old routes of commerce and trade.

Futuramanila, at the Osage Gallery Kwun Tong in Hong Kong, opened September 5 and runs through October 6. It is a group exhibition by Wofford and 23 contemporary Filipino artists brought together by an association created through artist-run spaces and exchange residency programs. These artists practice both in the Philippines and abroad, exhibit their works locally and internationally, and possess a mutual connection with the collective Filipino identity. Their cross-cultural relations reinforce the core of the exhibit, providing a discussion drawn from various creative viewpoints.

Flor 1973-78 is part of the San Francisco Arts Commission Art on Market Street program. Six large posters, all made by Wofford, are posted in kiosks and illustrate scenes from a year in the life of the fictional Flor Villanueva, a transplant from Manila to San Francisco. The exhibit runs from September 23 to December 23.

The Art on Market Street program provides round-the-clock opportunities for thousands of workers, residents and visitors in downtown San Francisco to view posters of original artwork installed in kiosks. Periodically throughout the year they are also able to enjoy special temporary projects at various locations along Market Street.

Established in 1992, the program has provided artists living in the Bay Area an opportunity to reflect the cultural complexities of a major urban boulevard with artworks created specially for both the Kiosk Poster Series and the Temporary Projects program.