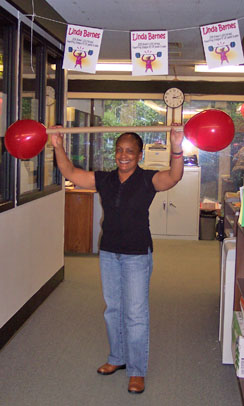 Linda Barnes, an office assistant in DVC’s counseling department, recently won the 2008 National Powerlifting Competition in Columbus, Ohio. Twelve women from across the United States competed in the annual event, which was hosted by the United Powerlifting Association.

But what makes this achievement so incredible is that Barnes is a 58-year-old grandmother who stands 4’ 10” tall and weighs about 101 pounds. “I definitely was the oldest one competing,” she chuckles.

Barnes’ story started when she turned forty. “I had raised my four children, and never done sports myself. I knew a woman who powerlifted, so I thought I’d give it a try. I really liked it. I lifted and competed for several years, then had to take a ten year break for personal reasons. I really missed it, though. It was such a part of me. A couple of years ago, I decided to come back and I set a goal for myself to lift 300 pounds. It was something I had never done before.”

“When I squatted 303 pounds at the nationals, I was so emotional. I had surpassed my dream,” continues Barnes. “Now my children and grandchildren are amazed at what Granny can do.”

To stay in shape, Barnes trains four days a week at Diablo Barbell Gym in Concord. She is overwhelmed by the support she has received from her friends at the gym and from her DVC co-workers. “The whole department threw a party for me when I came back from the championship. There was a banner, balloons, and even a barbell on the cake. I’ve never had that kind of applause before. It was wonderful.”