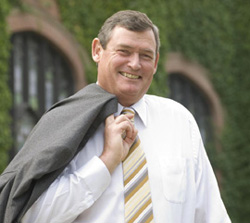 Timothy P. White, a graduate of Diablo Valley College, has officially begun his term as the new chancellor of the University of California, Riverside.

An immigrant from Argentina who attended all three systems of California public higher education, White has three decades of experience in public research universities. He has held faculty appointments at the University of Michigan, UC Berkeley and Oregon State University, before joining the University of Idaho as president in August 2004.

Born in Buenos Aires, White immigrated with his family to Canada and then to Northern California, where he began his career in higher education at Diablo Valley College.

“I learned a lot about myself and my academic abilities during my time at DVC,” he reflects. “The courses I took helped prepare me for my undergraduate degree in four years, and my involvement in intercollegiate athletics -- swimming and water polo -- built self-confidence and furthered my clear understanding of the power of teamwork and focusing on goals.”

In 1966-67, White was named as a Junior College All-American in both swimming and water polo, and made the All Golden Gate Conference in both sports. He was inducted into the Diablo Valley College Athletic Hall of Fame in 2006.

One of the most ethnically diverse university campuses in the nation, UC Riverside has an enrollment of 17,000 students and offers bachelor’s degree programs in 78 majors, 50 master’s degree programs, 38 Ph.D. programs and 17 state teaching credentials.