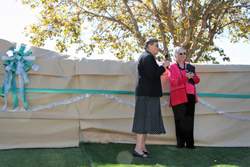 Diablo Valley College has a grand new sign on Golf Club Road to mark the entrance to the college. For many years, visitors to the college have been frustrated that they either had difficulty locating the large institution, or worse, were uncertain when they had arrived.

A gathering of college and district personnel looked on last Thursday as president Judy Walters and Contra Costa Community College board president Shelia Grilli each said a few words before unwrapping the huge sign, which had been hidden from view until the time of the official unveiling.

“Most of you know by now how long I have waited for this moment,” said Dr. Walters, as she told of her experience looking for the sign when she first came to interview for the presidency position at the college. “I think it is very fitting that this is happening at the same time that we are celebrating the 60 year anniversary of our college. We think this new sign is sturdy enough to take us through the next 60 years.”

The sign that was officially unveiled on Thursday is the largest of four concrete signs that approximately mark the four corners of the Pleasant Hill campus. These signs were designed with input from a college task force co-chaired by Chris Leivas and Michael Almaguer with participation from Guy Grace, Judy Klein Flynn, Jim Conley, Dan Abbott and Michele Krup. 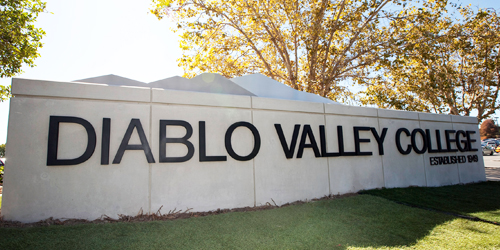