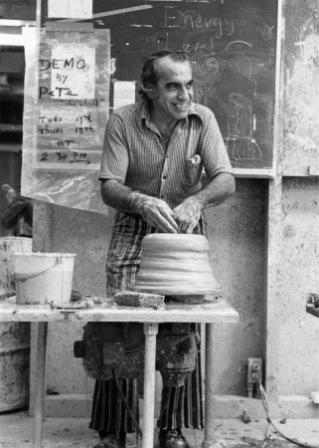 The Diablo Valley College Art Gallery will host an exhibition of artwork by the artist, Peter Voulkos, from January 26 to March 19, 2009. A reception will be held at the Gallery on Thursday, January 29 from 6 to 8 p.m.

The gallery is featuring a selection of art in a variety of media along with related materials by and about Voulkos who was born in Montana in 1924 and died in 2002. His long career encompassed both a rich and prolific career as a producing and exhibiting artist and a long tenure as an influential teacher and professor of ceramics and sculpture for over thirty years primarily at the University of California, Berkeley. In addition, he conducted numerous workshops nationally and abroad while at U.C.B. and after his retirement from the university. He was nourished by his teaching -in the interaction with students and others at his demonstrations -and he thrived on the making of art; it grounded him.

The exhibition is geared towards students and those unfamiliar with him or his work, hence the 101 in the title -to allude to a hypothetical college course number such as Art 101 and often a class in beginning art. Therefore, some attention will be given to the educational aspects of his working processes, how he handled materials and conditions that arose. As teaching was an important part of his life -he often remarked that he learned more from his students than they did from him- it too was influential in his career.

The exhibit is comprised of twenty-two pieces in ceramic, bronze and print media. Voulkos was known principally for his ceramic work, initially for classically wheel thrown functional pottery which he came to call his "production ware" and later for pioneering experimental, revolutionary clay work from the mid-1950s into the 1960s, one of which is a well-known eighty-four-inch tall sculpture called Gallas Rock now in the collection of the Franklin D. Murphy Sculpture Park at the University of California, Los Angeles. By the 1970s, he had honed his wheel thrown forms to what he called the "plate," "ice bucket" and "stack" forms. Throughout his career however he also made "tea bowls." His evolution and the diversity in his shapes, markings, surfaces and handling of clay is represented by three large plates executed in 1973, 1980 and 1997, using the gas firing process, his early ventures in wood firing begun in 1979 and the later techniques that he explored until his death. A 1990 wood fired ice bucket and three tea bowls -a high fire, richly glazed, gas fired bowl made in 1973, a 1990 wood fired bowl on which no glaze was applied prior to its firing and a 1999 soda fired tea bowl round out the ceramic work.

Voulkos had a keen interest in printmaking -the earliest examples date from 1949 while he was an undergraduate at Montana State University in Bozeman and where he had enrolled initially intending to become a painter. In this exhibit, his printmaking endeavors will be represented by lithographs made in 1979; a large 1985 monotype along with an aluminum plate used to make the monotypes and which still bears the "ghost" image; a pair of prints from a 1994 edition of forty-five prints called an edition varié -each is derived from the same original plate but subsequently treated individually thus making each of the prints in this edition unique. The prints conclude with a number of small drypoints of which some are from editions and some are uniques -these latter are also variations on the original etched plate from which editions were pulled. In addition, his 1985 collage, St. Elmo's Fire, one of a series of eleven large collages which developed from his work on monotypes, will be on view.

It was in the 1960s, after Voulkos moved to Berkeley from Los Angeles where he had established what became a pivotal center of ceramics activity at the Los Angeles County Art Institute (now the Otis Art Institute), that he began to work in bronze and established a foundry at U.C.B. For the next fifteen years, he focused on bronzes of an increasingly monumental scale for which most were commissions for public institutions, schools and museums. One of his maquettes for his forty-seven-foot-long bronze sculpture, Sirius, is included in the show. The actual sculpture and one of the largest of his bronzes, Sirius, now belongs to the City of Dublin. In 1986, Voulkos began another series of bronzes with another focus -selecting from his ceramic plates, ice buckets and stacks those which he thought would translate well into the bronze medium, he had molds made from which bronzes were cast in editions of varying number and which are collectively referred to as the bronze editions. One of these, a 1974 stack, is represented in the show. It is serendipitous that the original clay version from which it derived will be concurrently on view in San Francisco at the Braunstein/Quay Gallery in an exhibition entitled Peter Voulkos: The Montana, Los Angeles and Berkeley Years. The show at Braunstein/Quay features stellar examples of Voulkos ceramic work from the 1950s, 1960s and 1970s.

Finally, the DVC exhibit will display a large selection of Voulkos' posters and announcements ranging from 1956 to the present from his exhibitions and workshops, photos of him working and a few cartoons and drawings to impart a sense of the range of his work, his career and his personality.

The Gallery will also be screening a documentary entitled Our Founding Mudder who art in heaven: A Workshop with Peter Voulkos, filmed and produced by Martin Holt of Montana Art Works. This one hour DVD presents an intimate look at Voulkos' working technique in his construction of a clay "stack" at a workshop, the Olympic Games of Clay, held in Ringebu, Norway in 1993. It demonstrates in a candid and entertaining way the artist's production of a work formed by direct encounter with material without preconception or contrivance. An audio track of an interview in the 1970s of Voulkos talking about his background, his experiences and his philosophy accompanies portions of the 1993 visual footage and at other times, the flamenco music Voulkos used in his workshops takes precedence. Like many of the spectators at this illuminating workshop, students and lay people alike will derive a living appreciation of this greatest of "mudders," an acknowledged giant of modern art at the peak of his luminous career.

This exhibition is in collaboration with the Voulkos and Co. Catalogue Project which is maintained by Sam Jornlin and who curated the show with assistance from Michele Krup, Art Department Chairperson, Diablo Valley College; Arthur Scott King, Art Gallery Coordinator, Diablo Valley College and Nicole Krup, a junior at the University of California, Berkeley. The purpose of the Catalogue Project is to research and document the body of artwork Voulkos created over his lifetime. More information can be found on the Quest section of the web site, www.voulkos.com/quest which also features examples of a few of the works catalogued thus far.

The Diablo Valley College Art Gallery is located at 321 Golf Club Road. Pleasant Hill, CA 94523 in the art complex room A-305. The exhibition is free and open to the public from 11 a.m. to 4.p.m. Monday through Thursday.