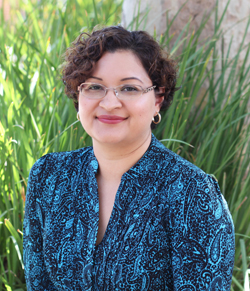 Carla Rosas' parents emigrated from El Salvador to New York City when they were both quite young. Her dad was 17 and hadn’t completed high school; her mother made the trip just after completing high school at 18. The two had grown up only a few blocks from one another in El Salvador but they never met until they were both in New York. They fell in love, married and started their family in New York. Carla was the first born followed a year later by her oldest brother Luis.

Carla’s parents quickly realized that New York was not the environment they wanted for their young family, so they loaded all of their possessions into a station wagon and a U-Haul trailer, and the four of them headed across the country to California. Carla was four years old when they made the trip, and remembers very little about it. “Looking back now, I am awed by how brave my parents were.” Carla said. “They didn’t know anyone in California, they were still very new to the English language and culture, and they didn’t have jobs or even prospects waiting for them. All they had was a strong feeling that California was where they wanted to raise their family.”

After a few brief stays, they settled in Pacifica, where Carla’s second brother Sergio was born. Carla was about six at the time. After about a year, they moved again, this time settling into a flat in the Mission District of San Francisco where Carla’s youngest brother Michael was born.

Carla’s mother found work cleaning houses part time and her father was fortunate enough to find a job that he really enjoyed, working for Alhambra. Carla’s parents managed to arrange their work hours so that one of them was always home while her three younger brothers were small.

Carla’s parents worked very hard for what little money had, and while they couldn’t afford a lot of nice things, they considered their children’s education a high priority. So, after asking a few questions they discovered that the local private school associated with their church, St. Anthony’s, would be affordable for them if they took advantage of the financial aid and did a lot of volunteer work, which they would have happily done anyway.

When Carla first started school, the language was a challenge for her. She had never spoken a word of English in her home and St. Anthony’s did not offer an ESL program. She was fortunate enough to have a teacher who was willing to spend extra time with her to work on her reading and language skills. With a lot of one-on-one time and even more homework, Carla was able to catch up and in many cases even surpass her peers to become an excellent reader.

“I was 13 years old at the time,” Carla recalls. “When my mom started working full time, I took over the responsibilities of getting my three brothers up in the morning, I made our breakfast and school lunches, and we were out the door to school. It was fun.”

Carla also saw to it that everyone arrived home safely and she supervised the afternoon homework. The transition to English was much easier on Carla’s brothers when they entered school, because Carla got into the habit of speaking English to her brothers before they even started school, even though Spanish continued to be the language they all used when speaking with her parents.

“It was always expected that my brothers and I would all go to college,” Carla said. “My parents never even considered it an option; it was just a fact, and none of us questioned it. I was a good student; I was involved in a lot of school activities, and even participated in a program that took me to Israel for a couple of months during my senior year. But even with so many educational opportunities, I still never figured out what I wanted to do. This made choosing a college very challenging for me.” 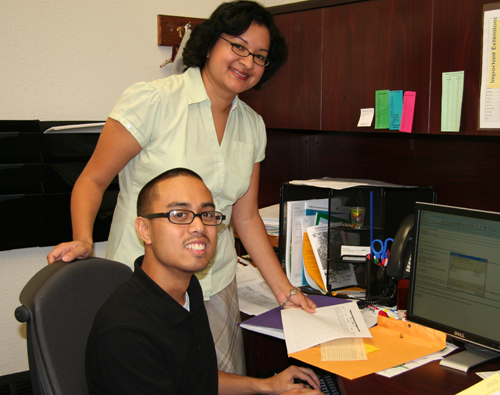 Through the Upward Bound program, Carla was encouraged to apply to all of the UCs and CSUs, but when the acceptance letters started coming in, her father seemed to have his heart set on her going to UC Davis. This is what she ultimately chose, but she suspects that the decision was not made for the right reasons, and the consequences were evident. First Carla was put on academic probation and then later suspension.

“Basically, I was kicked out,” Carla laughed. “It wasn’t funny at the time. I knew it was not because I wasn’t smart enough; I just wasn’t ready to be there, especially since I didn’t know what I wanted to do with my life. It was hard for me to see the point of working so hard in school. I figured I would eventually go back, I just didn’t know when.”

It wasn’t until she watched her husband graduate from UC Davis that she realized that she really did want to have her degree also. But by this time Carla had married and had her first child. It wasn’t so easy.

When the couple moved to Pittsburg to be closer to her parents, who had moved from San Francisco when her two youngest brothers were in high school, Carla realized that this might be her chance. She began taking classes at Los Medanos College when she learned that she qualified for much more financial aid than she had realized.

Carla took classes, worked part-time, and cared for her young family. “It was pretty crazy,” Carla said, “but I guess it has always been like that. I don’t mind working hard, as long as I know why I am doing it.”

When Carla transferred to Cal State East Bay, she still did not know exactly what she wanted to do, but she knew she was getting closer. “I wanted to somehow help others to have the kind of opportunities and positive experiences that I had at LMC.” Carla knew there were a lot of students and parents out there who didn’t know about all of the different ways there were for them to reach their goals. She wanted to somehow share this information, especially with her Latino community.

After graduation, the first place Carla started looking for a job was at the nearby community colleges. She took the first job she found at Diablo Valley College. She knew if she just got her foot in the door that it would open up more opportunities for her. Her first job was in the Financial Aid Office.

“I never thought I’d be saying that I ‘fell in love with financial aid’,” Carla laughed, “but I really do love what I am doing. I guess you could say I’m just a paper pusher, and yet, each piece of paper represents a person with dreams, goals, hardships and barriers. I want to do everything I can to make their paperwork go through smoothly and on time, so these students can focus on their studies and not have to worry so much about paying their bills. I know what that’s like.”

“I also want to acknowledge my mentor, Brenda Jerez.” Carla said. “As the director of DVC’s Financial Aid Office, Brenda has taken the time to share with me her knowledge and passion about her work here at the college. Her sincere caring for the students that we serve has been an inspiration throughout our office.”

Now, as a financial aid specialist and Spanish language speaker, Carla has a lot of opportunities to join the DVC outreach team whenever Spanish language is needed. That’s her favorite part of the job. She loves to talk to potential students and parents that she meets and encourage them to consider community college. It is not a waste of time.

“I love doing outreach,” Carla said. “My goal is to share the message that there are a lot more options than most people realize. A lot of students are eligible for aid and don’t realize that they are. I want them to really believe that. Money should never be the reason that people don’t go to college.”

Carla is also DVC’s coordinator for Expanding Your Horizons, a program that exposes middle school girls to careers in math, science and engineering. “The numbers of Spanish speaking students and parents have steadily increased from year to year,” Carla said. “I think it is because we are getting to know more people, and we are building strong ties with folks who are helping us get the information out there. Word of mouth is a very strong form of communication in the Latino community.”

When asked about her future goals, Carla announced that she has just been accepted to the St. Mary’s College program for a master’s degree in leadership.

“Because of my experience and the experiences of my parents, I have discovered my passion: to help make college more accessible to the Hispanic community,” Carla explains. “Everyone, no matter where they come from, should have the opportunity to reach their academic goals. I know there are a lot of real barriers and perhaps even more imagined barriers. I want to work in a position where I can help remove as many of the real barriers as possible, while also working on getting the word out that most of the imagined barriers simply don’t exist. There are many different ways to reach a goal. I always enjoy helping students explore all of these options. That’s what all of us in the Financial Aid Office do, and it is one of the reasons I love being here.”