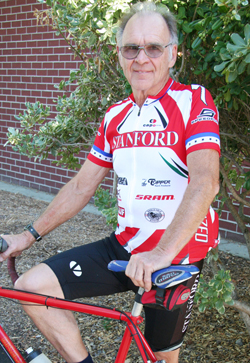 Ken Green, retired DVC engineering professor (1994) and current part-time math instructor, is an avid bicycle rider and racer, and has recently gone from “green” to “silver.”

Back in 1962, when Green started teaching at DVC, he became a pioneer in the “green” movement– commuting to campus by bicycle from Concord, then Walnut Creek, then San Leandro, back before bike commuting was popular.

From there, he said, his interest in bicycling just “kind of evolved.” He entered his first bike race in 1969 (BEFORE, he noted, Lance Armstrong was even born!) and has raced every year since.

“I have gone to the United States Cycling Federation Masters’ National Championships a number of times,” he said, “and I regularly placed in the top 10, but never won a medal.”

That all changed in August this year, when for the first time he participated in the Senior Games National Championships August 6-10, which were headquartered this year at Stanford University.

The Senior Games National Championships are held every two years in odd years. To qualify, Green said, an athlete has to place in the top two in a State Championship Senior Games the prior year. “I missed the California senior games last year, but later did the Washington State Senior Games, and got second in the road race and second in the time trial to qualify.” He thought it was kind of strange, competing and placing in the 70-74 age class in order to compete this year in the 75-79 age class.

Green said that at one point while at DVC, he was advisor to the Hiking, Cycling, and Mountaineering Club, which died when its few student leaders left DVC. He was a cofounder of a local bike club called Diablo Wheelmen, which was active for 15-20 years and promoted a local road race, the Crockett Martinez Road Race, which ended when their road between Port Costa and Martinez washed out.

He also participated in a Super Tour begun by one of the Diablo Wheelmen. It was a two-week tour that covered 100+ miles a day and traveled various routes in several states. One of the California courses traveled over one of the major Sierra passes (Sonora, Tioga, Ebbetts, etc) each day. Green participated in the tour nine times, but not in the past few years.

“I keep at it,” he said, “because I enjoy cycling, it is environmentally friendly, it promotes my health, and the competitions have deadlines, so I can’t just say ‘manana’ forever.”