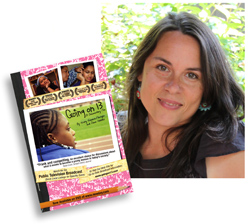 Going on 13, a documentary film by Kristy Guevara-Flanagan, DVC assistant professor of film, video, and new media, and Dawn Valadez, has been selected for showing at the 8th annual Oakland International Film Festival to be held October 8-14.

The film will be shown twice, at 5 pm Saturday, October 10, at Merritt College, and at 5 pm Monday, October 12, at Jack London Theater #1. Both Guevara-Flanagan and Valadez will be in attendance.

“I am really excited to be screening Going on 13 in my own hometown,” Guevara-Flanagan said. “Much of the film was shot in Oakland and so, it really is a wonderful homecoming! My co-director Dawn Valadez and I made the film because we felt like there wasn’t a lot of material out there about pre-teens. We wanted to make a film that showed in an intimate and personal way, the transition girls go through in crossing over from childhood to adolescence. We hope audiences walk away with a deeper understanding of the questions, challenges and decisions young girls face daily during those awkward middle school years.”

The film follows Ariana, Isha, Rosie and Esme as they let go of childhood, and enters their world as they negotiate the precious, precarious moments between being a little girl and becoming a young woman.

“We all go through puberty,” the directors said. “We all emerge transformed. These are the universals. But we wondered what life is like, today, for girls like us. Girls from the city, from immigrant and multiethnic families; girls who grew up with step-parents and within extended families. These are girls with whom we can relate and yet their world is a much different place.

“There is a whole world of emotional, cultural and social relationships that girls experience. It’s an intense period. We wanted to capture that and ask, ‘How do girls separate themselves from their parents and develop their own identity? How does this happen within today’s complex social and cultural context?’

“Many adults forget to listen to young people or simply choose to ignore them,” Guevara-Flanagan concluded. “We wanted to make a space for these girls, at this time, to share their stories. We couldn’t have written this story; we didn’t know it. It was a story only they could tell.”

Guevara-Flanagan and Valadez will be guests on NPR’s “The California Report” at 4:30, 6:30, and 11:30 pm on Friday, October 19. The two also will attend the Girls Inc. Pacific Regional Conference on Thursday, October 15, in Alameda, and the After School Conference Key Note on Saturday, November 14, in Santa Rosa.