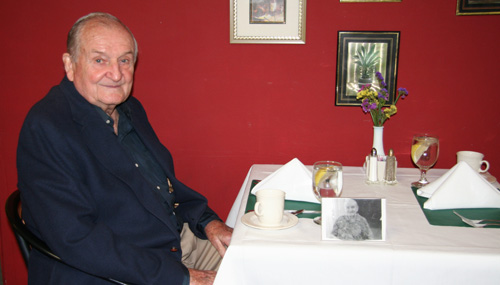 He's a regular at the Norseman Restaurant at Diablo Valley College, a familiar face who delights in being there.

"Mr. Parker", as he is fondly known, is nearly 90 years old, has his own table, shares his dessert with the program coordinator, and visits with everyone who stops by his table. He is charming, has a great memory, and is appreciative of the good food. But, he says, not even the servers he sees every day know that Parker is really his middle name.

John Parker Tietjen may be the greatest fan that DVC's Norseman Restaurant has ever had. He has been eating at the culinary arts venue at least twice a week for 26 years, when he and his wife Melanie first tried it out.

"I used to help the students learn to make reservations by calling there, but everyone has a hard time spelling my name," he said. "So my wife suggested that I just use Parker, my middle name. I've been ‘Mr. Parker' ever since."

Tietjen is native to the area. He grew up and attended high school in Berkeley, where he first met his wife, Melanie. He was just 16 then, and decided after just a few minutes that he would marry her. He later found out she felt pretty much the same way.

They were eventually married-on July 3, 1941, while John was a student at UC Berkeley and Melanie was working at the Berkeley Savings and Loan, where she had a knack for selecting stocks and bonds. John served in World War II, then became a teacher.

"I first taught at the college level, but I didn't particularly like it," he said. "Then I went to El Cerrito High School, and that was the best job I ever had. I taught English, comparative government, Spanish and math." He also put in an FM radio station at the school, and trained students to run it. He taught there for 37 years before retiring in 1982.

From the early 1950s until retirement, John and Melanie lived at their home and vineyard in Nice Valley, near Sonoma, though they also owned a house in the Berkeley Hills. He hired a manager to run the vineyard because he didn't know about farming and grapes, but they loved the area. When their two sons, John and Robert, moved away, the Tietjens realized that the nearest hospital was in Napa, and they had no family around to help them if they needed a doctor. So they sold the place and moved to their home in the Berkeley Hills.

It was about that time, Tietjen said, that he and Melanie started coming to the Norseman. He had heard about it, he said, and wanted to get his wife out of the kitchen. Melanie's mother had owned a culinary school in the Alsace-Lorraine region of France, and Melanie, it turns out, was a gourmet cook.

"We were very impressed," Tietjen said. "The food was very good, and my wife liked the white table cloths, and that the servers wore tuxes. The atmosphere is very nice-not a mob scene like it is downtown." They came at least twice a week, got to know the chefs and their backgrounds and have kept up with those who have moved on.

"Maggie Crum at the Contra Costa Times used to write a column where she reviewed restaurants," he said. "I called her once and told her she really should review this one. After she had been here and wrote her story, I called her again and said, ‘I didn't steer you wrong, did I.'"

So, for someone so familiar with the Norseman's fare, what's his favorite dish? All of them, he says-though the fact that the staff serves him mashed potatoes every day speaks volumes as to his real favorite. "I can't think of one meal I've had here that I thought was mediocre," he said. "That's quite an accomplishment."

Parker has high praise for the restaurant. "This program is a very good thing. Young people who finish their certificate or degree can get a job the next day. Restaurants want to hire them because they're well trained and very good at what they do. There's not another department in the whole school that can guarantee a job. And it's just $20 a unit-if they don't want to come here, they can go to study in St. Helena and pay $40,000 to $50,000 a year. But the restaurants are hiring the DVC students."

Sadly, Tietjen's beloved wife Melanie passed away six years ago, and his world fell apart. "If there is anybody who had a wife like mine, I'd like to talk to them," he said. But he continues to come for lunch, occasionally bringing one of his sons or another guest, most often sitting alone and hoping that someone will join him.

"The atmosphere here is so pleasant. I like to sit down, have a nice lunch, and watch the ducks on the pond. And the students come by and say hello-they think I'm their father or grandfather or something."