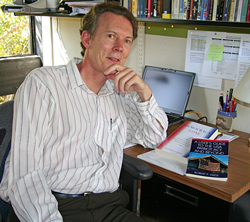 Robert Abele, philosophy professor at Diablo Valley College, recently had his book, Democracy Gone: A Chronicle of the Last Chapters of the Great American Democratic Experiment, published by Rowman/Littlefield. His third book, The Anatomy of a Deception, is coming out in October.

Abele’s first book, A User’s Guide to the USA Patriot Act, was published in October of 2004.

Democracy Gone, he said, was written with the explicit intention of making it accessible to the general public, but he finds that it also works well in class when discussing philosophy and politics.

“Both books (Democracy Gone and Anatomy of a Deception) were focused on helping citizens wake up to the realities of contemporary American economy, politics and culture,” he said.

For two years, Abele was the prime time commentator on the KVMR-FM evening news in Nevada City-Grass Valley, presenting weekly radio essays on philosophy and politics. Democracy Gone grew out of that experience. 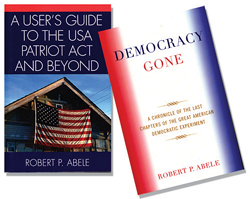 The general theory behind Democracy Gone, Abele said, “is that we have essentially lived through the collapse of what was left of our democratic form of government.

“Democracy is always about the people, their rights, their power, and their common good. The issues dealt with in the book demonstrate that the main figures who were and are moving politics and the economy today were not and are not committed to democracy, but rather to increasing their economic and political advantage over the masses of citizens. The book is a clarion call for increasing our knowledge, thinking, discussion, and even action in the face of these significant movements of capital and political concentrations of power.”

In Anatomy of a Deception, Abele said he hoped to demonstrate that the U.S. media, and those who were given prominent time in the media in 2002-2003 to state their positions regarding the forthcoming invasion of Iraq, deliberately ignored significant evidence, ethical principles, and legal obligations that would have decisively undermined their support of a U.S. invasion. The evidence countering support for an invasion was, he said, widely available prior to the actual invasion to anyone who cared to look, but was set aside by mainstream media “debates” on the invasion.

How has teaching at DVC impacted his writing?

“One of the many great things about being at DVC,” Abele said, “is that the atmosphere here encourages such things as I am doing, both in class and in my research and writing. The faculty and administrators I have had experiences with have been incredibly supportive of my projects, and that encourages me to push forward with new projects.

“I love to research and love to write,” Abele continued. “They are right up there with my love of teaching. Teaching and writing allow me a means of promoting substantive dialogue on the issues that face us today. That is what democracy is all about: rational dialogue. We have lost that over the past 30 years.

“My single hope in undertaking these projects,” he said, “is to make a substantive contribution to the cultural and political dialogue we need to be involved in today.”