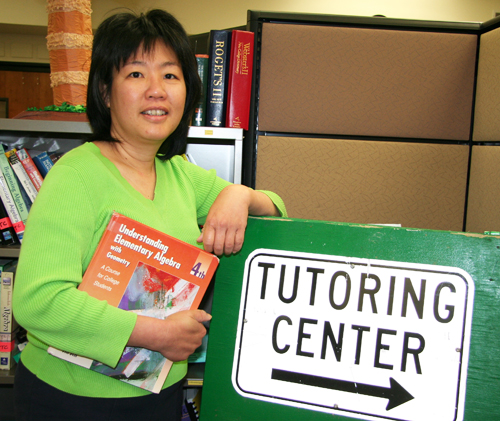 Seven years ago, Annie Leong Chan was a resident of Malaysia, a high school graduate who had longed to go to college, but whose family's poverty required that she instead go to work to help support the family and put her younger sister through school.

Today she is married, a resident of the Bay Area, and a foster parent who, along with her husband, John Chan, is about to adopt. And after transferring from Diablo Valley College to San Francisco State University, Annie is about to receive a bachelor's degree in kinesiology.

She has been chosen by the SFSU College of Health and Human Services as its Hood recipient for this year's graduation ceremony-selected as the outstanding student to represent all the students from the 10 departments within the college. She will receive special recognition from the University for her outstanding academic accomplishments as well as her dedicated service to her family, school, and community. She also will be honored at the SFSU Honors Convocation.

For Annie, this is a dream come true, and she gives thanks to her husband John and to DVC for making it happen.

"I am the oldest girl of three children in a Chinese family," Annie said. "While I was growing up in Malaysia, I developed a passion for education by the time I was 15, recognizing how it would help me excel." But her parents could only afford to send one child through the university, and they sent her brother to study abroad. Annie worked as a tutor to help her family with expenses and to send her younger sister through college.

She developed her skills and love for teaching by trying to help students of different background understand languages foreign to them, and learned and improved her English by tutoring elementary students in English. She also changed jobs a few times, accumulating skills in administration, communication and management, and with much hard work, eventually started and owned two companies.

She moved to the United States in 2002. When she married, Annie found a husband who was very supportive of her educational goals, and constantly encouraged her to go back to school. She enrolled at DVC in the spring of 2004.

"I was 37, and after 19 years of not being a student, not knowing what the American school/college system was like, I was scared," she said, and added that the scariest part was not knowing whether she would be able to understand the material, since everything was taught in English. "I was not confident that my English was good enough for college, so I had a lot of reservations about myself when I first came to DVC."

Her first encounter with professors at DVC was with Mr. Tom Mowry, her statistics professor, and he helped change her life.

"Statistics was my very first class on the first day of school at 9 a.m. on Monday morning," she recalls. "I had taken statistics 20 years prior, and had no clue what was going on. I was thrilled when that class ended, and vowed never to touch the topic again. I was terrified of statistics."  In fact, when she learned that statistics was required for her major in kinesiology, she almost changed her major.

But she decided to give statistics another try, and, she said, "With Mr. Mowry's patience and guidance, I came to love statistics so much that I started sharing my new-found understanding with fellow classmates, and subsequently became a tutor." She continued tutoring statistics when she transferred to SFSU. "Not only did Mr. Mowry instill in me a joy for statistics, he also sparked a new passion in me for mathematics, my other weakest subject," she said.

Annie was also very shy, and decided the best way to overcome that was to engage in public speaking, so she enrolled in speech and joined the DVC forensic speech team. Her advisor, Ana Petero, "who never ceased to support me," encouraged her to compete in performance in literature, and she won first prize in both DVC and intercollegiate competitions.

Her other great support at DVC came from English instructor Patrick Leong, who was her writing instructor through the Puente Project. "He played the biggest role in helping me with my writing skill, which was atrocious when I first attended DVC," Annie said. "Had it not been for Mr. Leong, I would still be struggling."

Annie also became part of the Puente Project. "The environment within the project was the most helpful in giving me a sense of belonging," she said. "Even though I am not a Latina, everybody in the project- teachers, counselors and students alike- took me in as one of the Puente family, and that was special for me. They were always there for me, just like a real family. There was never a time when they ceased to encourage me to excel and reach for my dream-not even after I left DVC."

And leave she did. Annie transferred to San Francisco State in the fall of 2006, majoring in kinesiology as the first step in her plan to go to graduate school and become a physical therapist. She took a break from school during spring 2008, because she and her husband had become foster parents to three children, and Annie wanted to give them 100 per cent of her attention.

When two of them left for adoptive homes in the fall of 2008 and the third was ready for preschool, she went back to SFSU.

"DVC, with all her caring teachers and environment, helped equip me with all the skills, knowledge and confidence that I needed in an even bigger campus," Annie said. "I came into DVC with nothing, but left DVC with everything I needed to achieve a higher level in education. I was a totally different person. I was less afraid of new environments, and I was not afraid to ask for help and seek out information. I even sought to volunteer as a tutor at SFSU as a means to get acquainted with the campus and how things were done there."

Although she planned to continue with graduate school after graduation, her husband has had some health problems, and they also decided to adopt one of their foster children, and once again, Annie has put her plans on hold. But she will never give up on the prospect of graduate school.

In the meantime, she said, she plans to return to DVC to take more math classes to aid her ability to tutor students, and she wants to be a mentor with the Puente Project. She also plans to accept an offer to be a tutor/teacher with the Monument Future Project.

There is one more area that Annie addressed.

"I have had many people say that I am smart because I am Chinese," she said. "Being Chinese does not make me smart. I got where I am in life and in school through persistence and working hard. I had many professors, mentors, and counselors to guide me, but ultimately I had to put in all the hard work to make something of the effort and encouragement bestowed on me. This is the message that I would like to share with anybody who thinks that everything comes naturally to me because I am Chinese. It is not so.

"My biggest wish since I left my schooling days back in Malaysia was for a chance to go for higher education. As I was completing my final semester at SFSU, I was very thankful that this wish had been granted, and I was excited about finally having a bachelor's degree with a promising chance of being accepted into graduate school when I apply.

"When I was told that I was the Hood recipient, the highest honor in the college, I was humbled. I want to share this honor with all the instructors and counselors, both at DVC and SFSU, who have tirelessly helped me to complete my educational journey with good grades. I especially want to share this honor with my husband, John, who has been the biggest turning point in my life by not only making my dream to go back to school come true, but also by helping out with chores at home, including cooking and taking care of our foster child, so that I could complete school work and prepare for exams. Without all these people, it would have been very difficult for me to accomplish what I have achieved."