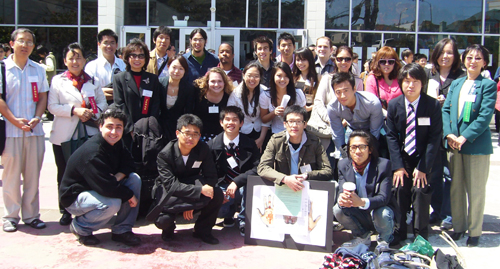 Diablo Valley College students of Chinese were among the winners of the 34th annual Chinese speech contest of California.

The Chinese speech contest was inaugurated in 1962 by Professors K.Y. Xu, Leo Chen and Maurice Tseng of San Francisco State University. Open to all Bay Area Chinese language students of various levels, from elementary to university, the contest is a challenging and enjoyable event. Through the years, this popular event has evolved into the present-day Mandarin speech contest, and is the largest of its kind in the country.

The contest is sponsored by the Chinese Language Teachers Association of California, a nonprofit organization whose goal is to promote Chinese language teaching and learning in California.

In addition, the 8th annual "Chinese Bridge" Language and Performance Competition was held May 10 at SFSU, hosted by the Confucius Institute at San Francisco State University and co-sponsored by the Consulate General of the People's Republic of China.

This year marks the second time DVC students have participated in this event. Winners were first semester students Jessica Stewart, who won the Best Eloquence Award, and Jasmine Ocegueda and Sundo Seo, who both won the Best Effort Award.

Chinese professor Sheree Lin extends thanks to Lily Miao, speech consultant, and to all the Chinese instructors in the department, as well as to the dean's office for generous support.