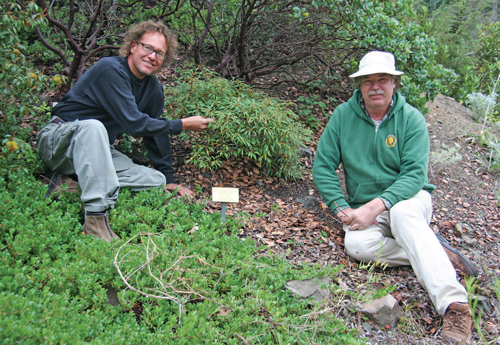 Dave Mrus of San Ramon is a self-proclaimed “artist, aesthetic pruner, landscape designer, horticulturist, plant explorer, and kid who is curious about the world around him and strives to ‘grok’ his landscape.”

He is also credited with the rediscovery of the location of a rare California native tree, a cut-leaf chinkapin, also called chinquapin (chrysolepis chrysophylla minor), the only one of its kind documented and observed in nature. The root chryso is Greek in origin and means golden.

A native of Stamford, Connecticut, Mrus graduated from high school there in 1980. He has attended several post-secondary institutions, and received his B.S. degree in Materials Management and Purchasing from Florida State University in 1990.

After moving to California in the early ’90s Mrus worked for a number of Silicon Valley technology firms. He enrolled in horticulture classes in the Spring of 2005, and that same year began to volunteer at the East Bay Regional Parks Botanic Garden (RPBG) in conjunction with a Native Plant I.D. class. He worked with long-time garden staff member Bert Johnson, and it was while at work with Johnson that Mrus first observed the cut-leaf chinquapin in the Antioch Dunes section of the RPBG.

Mrus learned from Johnson that Al Senares, former supervisor of the RPBG, had discovered the cutleaf chinquapin along Summit Road in Santa Cruz County in the early 1990s. Since 2005, Mrus has been conducting independent research, exploring, and observing populations of chinquapins. His goal is to learn how to grow and propagate the plant successfully. Chinquapins were considered by James B. Roof, the founder and first director of the Regional Parks Botanical Garden, to be one of California’s greatest horticulture failures.

Roof and others had conducted field studies of chinquapins from the 1930s to 1970s. However, since Senares discovered the cut-leaf tree in Santa Cruz in 1990, the only one ever seen, the plant had not been observed and recorded since the mid-1990s, and its location was lost. The closest its location could be pinpointed was to “a 10-mile stretch of a county road in the Santa Cruz mountains,” Mrus said.

Mrus decided to look for it, knowing that the hunt would be for a “needle in a haystack. How do you find one tree in a forest?” he asked. He made five trips to the Santa Cruz region in 2006 and 2007 to search. “I was beginning to wonder if perhaps the special tree was lost forever,” he said. 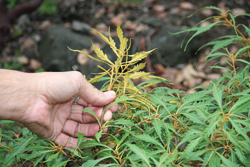 It was at the end of his fifth trip in 2007, when he had given up yet again and was on his way home, that he finally saw it.

“Treasure hunt fatigue was setting in,” he said, “and I began to pack my car for the trip home. As I drove down the road something caught the corner of my eye. Could it be? Yes, it was the treasure! I could not believe my eyes. There, nestled on a rise, was the cut-leaf chinquapin in a forest of chinquapins. Many photos and tears flowed around that special tree.”

He photographed it, marked its location, and now has received a scholarship from the East Bay Chapter of the California Native Plant Society to observe, research, and study the native chinquapins. He hopes to learn propagation techniques for seedlings and clones, transplanting techniques, their residential or commercial viability, and why the native tree forms a cut-leaf.

Mrus has been a student at DVC since Spring 2008, his most recent course being Natural Landscape Interpretation with Stewart Winchester.

After DVC, Mrus is not sure where life will lead him. But no matter where he goes from here, Mrus knows where that lone cut-leaf chinquapin tree will be.