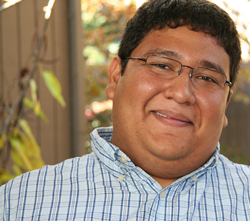 It’s a long way from El Salvador to Pleasant Hill, but for David Chavez, music bridged the gap.

Chavez, a current Diablo Valley College student, was born in El Salvador and, he says, he has always liked to sing. As a young boy growing up in San Miguel, Chavez was an acolyte at his Catholic church. One day the priest heard him singing and immediately added him to the choir. He was eight years old.

“I enjoyed it,” Chavez said. “Of course, it was different music back then. The church choir singing was more like folk music.”

At the age of 13, David and his family moved from El Salvador to California, settling in Concord, where Chavez entered his freshman year at Mt. Diablo High School.

“I didn’t speak any English then, so I had to learn English at school,” Chavez said. Again, music and singing helped him. “Most of the songs I sang had English words,” he said, “so I learned a lot of pronunciation by singing the songs.”

Chavez continued to sing in church when he moved to California, but he was no longer in the choir. He was a soloist—“kind of like a cantor,” he said, —and he was accompanied on the guitar by his brother, Luis.

Once again, fate stepped in.

“One day at school, my Spanish teacher heard me singing, and he introduced me to the choir director,” Chavez said. The choir director, of course, immediately put him in the choir, then talked with the other faculty and staff members to raise money for a grant. They arranged and paid for Chavez to take voice lessons during his final two years of high school. He enjoyed it.

“I had never had any voice training before that,” Chavez said. “The teacher decided that I had an operatic voice, and I liked that– I felt it suited me.”

But what about David’s parents? How did they feel about his involvement with music?

“Oh, they are happy,” Chavez said. “My father always wanted to be a musician, and my mother wanted to be a singer, so they are very supportive of me and my career choice.”

After graduating from high school, Chavez enrolled at Diablo Valley College, where he is majoring in music. He has found DVC to be very helpful in meeting his goals. 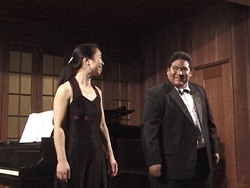 “I learned to read music at DVC– I didn’t know how to read music before. In Music 100, I got free voice lessons, which helped me a lot to improve. And I’ve been tutoring people in reading music and in music theory, and the experience is very helpful for what I want to do.”

At the college, Chavez performs as a member and featured soloist with the Concert Choir, Chamber Singers, DVC Masterworks Chorale, the DVC Philharmonic Orchestra and the DVC Symphonic Band.

It was at DVC that Chavez first started recital and opera singing.

“The teachers here [at DVC] have given me lots of chances to perform,” he said. “I always feel encouraged by the students and teachers alike. The teachers always try to help me, to feature me and to give me performance experience.” He recently was the featured soloist tenor in a piano concert in Berkeley with DVC faculty member and accomplished pianist Dale Tsang-Hall. According to Jeanette Peavler, another DVC staff member, “The concert was an over-the-top success!” 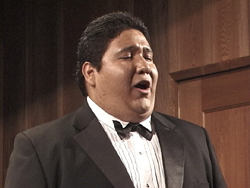 Chavez also has been a soloist with the Rossmoor Community chorus, the Moraga Community Chorus, the San Francisco Coro Hispano, the San Francisco Lyric Chorus, Festival Opera in Walnut Creek, Open Opera in Orinda, and the San Jose State University Concert Choir. He served as tenor section leader at many local churches, and currently sings at Saint Stephen’s Episcopal Church in Orinda.

Currently, Chavez is in the process of applying to a four-year institution to further his musical career.

“I would like to attend either University of the Pacific at Stockton, or the Mannes College of Music in New York,” Chavez said. “Then I hope to be an opera singer or a recitalist. I would also like to teach students who are talented but who have financial issues and can’t take lessons.”