Daivd Rios: from gangs to a bright future through education 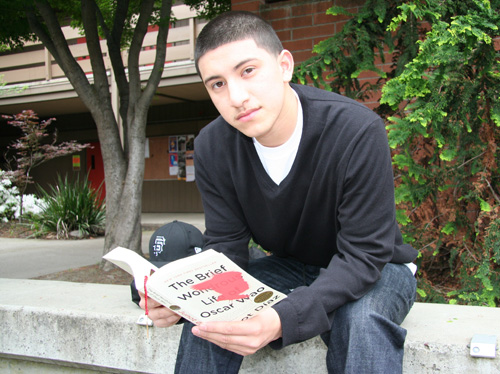 David Ramirez Rios is not your typical college freshman. He knows better than most how much education can change your life, because he almost didn't make it here.

As a freshman in high school, Rios said, his first three days of school were "nerve-wracking yet exciting." The fourth day, he was suspended for fighting. That was followed by many fights and many suspensions, and he was finally expelled from the Mt. Diablo Unified School District.

He was "waist-deep into a gang lifestyle," he said, and headed for a life in prison.

"At age 13, the fast life I was leading landed me in the hands of the law," he said. He was put on probation and forced to go to court, where he pleaded no contest to a misdemeanor charge of battery.

"I was in a situation where I had no control over my future; what was to become of my life was in the hands of a judge," Rios said. He was arrested, which was nothing new for him.

But his father and younger brother had accompanied him to court, and as the bailiff slapped the handcuffs around his wrists, Rios turned and looked at his father. It was the hardest thing he'd ever done in his life.

"I looked into my father's eyes, and I will never forget what I saw- a combination of disappointment, failure, frustration and sadness," he said. Then his father, the one man in his life who Rios had depicted as superman, shed tears. He couldn't bear it.

"I felt I had failed my father as a son, and my little brother as a role model," Rios said.

"It took countless minutes that turned into dreadful hours that became endless days for me to realize that if I kept heading in this direction, I would end up in prison, or maybe even dead," he said. "The picture of my destiny was painted for me." It was not a pretty picture.

He realized that the only way he could achieve his "American Dream" was through education. He prayed for another chance at life, and vowed to change his ways when he was released.

"Although it was hard, I was determined not to become a product of society, but instead become a creator," he said. The remainder of his freshman year was spent at Diablo Community Day School, which was for expelled students. There he finished his program with awards for outstanding math student, outstanding English student, and student of the year.

"I realized then that people believed in my aptitude as a student," he said, "and that was all the motivation I needed."

For his sophomore year, he attended Concord High School, but due to his lack of credits, he was in danger of not graduating with his class. That year he took his first class at DVC, a film class for which he received extra high school credits.

For his junior year, he transferred to Summit High School, a small necessary high school, where he stayed on track and was able to catch up on his credits. That allowed him to transfer back to Concord high School for his senior year, where he graduated with his class of 2008.

While at Summit High, Rios was approached by an EOPS outreach coordinator from Diablo Valley College, who explained in detail the EOPS Summer Institute at DVC. Rios saw it as a chance to get a head start on college, as well as an easy way to transition into a college lifestyle.

"Coming fresh out of high school, I wasted no time and started the Summer Institute a week after graduating," Rios said. Through the EOPS Summer Institute, he learned a great deal-about DVC student life, access to financial aid, complete information about the EOPS and DSS programs, about clubs and programs on campus and even transfer requirements.

"We were taken on field trips to San Francisco State University and UC Berkeley at no charge," Rios said. "Going to these college campuses broadened my horizons about higher education."

"The class was a learning community, and some of us developed close relationships with each other and with our instructor," he said. "My counseling instructor encouraged me to reach for my dreams, and later she even wrote a letter of recommendation for me when I was applying for scholarships." Rios was recently notified that he has been awarded the Coleman and the Dennis and Rowe Architecture scholarships through the DVC Foundation.

"I would definitely recommend the EOPS Summer Institute for high school students seeking more detailed information about college," he said. "It makes the transition from high school to college so much easier. "

His Summer Institute counselor was also the person who referred Rios to the Puente Project.

"I was skeptical about the Puente Project at first," he said. "I thought it was going to be some sort of English as a second language class, but I was completely wrong.

"I am so grateful that I joined Puente, because it is a learning community that becomes more of a family. Together we motivate and encourage each other to succeed. The world needs more successful Latinos, and I not only plan on achieving this, but I plan on giving back to my community by helping the gang-influenced youth. I want to become a motivational speaker and guide the younger generation in the right direction. I am the future of today, but they are the future of tomorrow."

Rios is a first-generation college student, and one of the main reasons he enrolled at DVC in the fall of 2008 was to set an example for his younger siblings, and to make his father proud.

"Nothing would make me happier than knowing my father is proud of my accomplishments thus far," he said.

Now age 19, Rios has been working fulltime at the Sun Valley Foot Locker since graduating from high school. However, he said, going to school fulltime and working fulltime is not something he would recommend, though doing so has really taught him how to manage his time. After he completed the EOPS Summer Institute, he was promoted to be the store's assistant manager.

As for the future, Rios plans to major in architecture, and in two years hopes to transfer to either UC Berkeley or Cal Poly at San Luis Obispo to earn a bachelor of arts degree in architecture.

" I believe that DVC is the way for high school graduates to go," he said. "It's the same general education as at any other college, and DVC has great professors and is financially convenient.

"I have learned that when it comes to education, nothing in this world is impossible, and no dream is out of reach. Despite my past experiences, I now find myself painting the picture of my future lived at my own graceful pace and will. To me, the sky is the limit."