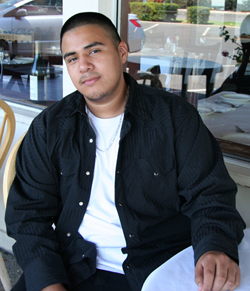 Edgar Cisneros of Walnut Creek always wanted to be a chef, but never thought he would find a way to his dream. But now at Diablo Valley College, he has found the support and encouragement to pursue his dreams with confidence. Edgar is enrolled in DVC’s culinary arts program and he feels certain that he will one day work as a chef.

In high school, Edgar attended the Transitional Learning Community, a continuation school on the campus of Concord High School. Then there was Ygnacio Valley High School, Prospect High School, and finally, Horizons Home Independent Study, the school from which he graduated. High school did not exactly go well for him.

“It was because of my grades,” he admits. “I know I messed up in high school. I know I should have tried harder, and that I could have done better, but it’s too late for that now. That’s why I don’t plan on doing the same thing with college.”

Edgar’s family doesn’t have a lot of money, so he didn’t think college was an option for him. Not only did he not have the money to pay for the fees and books, but more importantly, he did not have the time to devote to school when he felt he should be working to help his father support his mother and three younger brothers.

But all of Edgar’s ideas about college began to change when he enrolled in EOPS (Extended Opportunity Programs and Services) during the summer after high school; this program brought him to DVC.

“DVC has helped me to raise my self esteem,” Edgar said. “Before, I felt that college was not for me. But when I found out that DVC offered a great culinary arts program, and the classes were not too expensive, and I thought I might be able to afford them. I gave it a chance, and found that I really enjoyed college. DVC offered classes that interested me, so I did very well. It gave me hope that maybe I could get somewhere in life, like to a better-paying career.”

Once at DVC, Edgar became involved in the Career Exploration and Readiness Academy (CARRERA) at DVC, one of three regional workforce development programs funded by the Chancellor’s Office of the California Community Colleges through the Governor’s Career Technical Education Initiative. The East Bay Academy operates as a collaborative effort among the Contra Costa and Peralta Community College Districts, with seven participating colleges and community-based partners in Alameda and Contra Costa Counties.

CARRERA is designed to create a bridge to careers in high-growth sectors, and offers courses leading to more than 20 career paths in sustainable industries of the future. Students enroll in 12 units of college coursework best suited to their particular skills and interests, and thereby take the first steps toward earning a degree or certificate from DVC.

Students are provided extra help with registration, counseling, financial aid, free books, and other support services. The instruction provides practical, industry-specific examples taught within a learning community that also emphasizes the reading, writing, and math skills needed for success. CARRERA students and faculty go through the program together, creating a learning environment designed to support achievement and successful transition to further training or academic pursuits.

“CARRERA meant a lot to me because it motivated me to do better in college. I didn’t want to mess up like I had in high school,” Edgar said. “The program helped me find my way around the campus, find ways to look up information that I needed for my classes, find ways to stay organized, and helped me relax. I began to feel better about myself and started to participate more.

“I liked ALL my classes in the CARRERA program,” he said, “and I will never forget my classmates and teachers, who were very kind. Because I liked the classes so much and I did so well in them, there was never really a day that I didn’t feel like going to class.

“I would definitely recommend DVC to others,” Edgar said. “The classes are great, the campus is nice and the environment is pleasant. Not only did I get support for my classes, but I also learned about writing a resume and preparing for a job interview, which has given me more confidence.”

Edgar is spending the summer working in a nearby restaurant, gaining valuable experience that will help him get one step closer to his dream. After DVC, he plans to transfer to a culinary school such as Le Cordon Bleu in Pasadena or San Francisco, or any other school that specializes in culinary arts.

“I have no doubt that Edgar will be very successful,” said Rosy Garcia, DVC counselor. “I have seen him grow so much through the CARRERA program. It has been gratifying to watch the transformation from a very shy young man to one full of enthusiasm and confidence. He has the support of his parents, too. They have encouraged him every step of the way, and that makes a huge difference.”