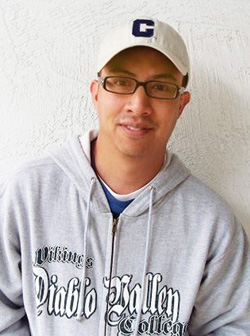 Joel Tablante graduated from Skyline High School in Oakland, and wanted to pursue a degree in mechanical engineering. He enrolled at Diablo Valley College in 1991 right out of high school, and took transferable undergraduate classes in engineering.

He attended DVC until 1995, during which time for one year he served as president of the Pilipino American Cultural Alliance (PACA) student club. Under his leadership, the organization put on cultural performances, attended regional and statewide conferences, and promoted cultural awareness.

Tablante transferred to University of California Berkeley in the fall of 1994 (while taking a few more classes at DVC), and earned his bachelor's degree in mechanical engineering in 1997. He continued on to graduate school in January of 1999 while working full time, and in December of 2000 he completed a master's degree in systems management from The College of Notre Dame in Belmont. He is currently employed as a manager of platform development at Electronic Arts Inc., one of the largest video game development companies in the world, located in the Silicon Valley.

Reflecting back, Tablante at the time was worried that choosing DVC may not have been the right choice given his career goals. He had been accepted to a UC campus right out of high school. Now, however, he feels a special connection to Diablo Valley College.

"It took me a while to realize it," he said, "but I appreciate my community college experience because I got a great education at DVC. In some cases I had more engaging, of equal caliber, and more accessible professors. In the end I received the same degree from UC Berkeley, but saved two to three years' worth of UC college tuition, which is a large sum of money compared to what you pay at DVC.

"I know that sometimes students can feel lost and have a lot of questions when attending a junior college: was I not good enough to be accepted to a four-year college? Am I getting the same level of education? Am I remaining competitive as a student? Is the major I want still within reach?"

For Tablante, the answers were all yes. With guidance from his counselors Danni Vilas and Carol Okay who were also the faculty sponsors for the Pilipino American Cultural Alliance club on campus, Tablante was able to track and complete the requirements to transfer to UC Berkeley, remaining focused on his educational goals.

"Students must realize that the opportunities [at a community college] are still the same, that the potential is still there, and that goals are still within reach," he shared. "I believe a student can get a great education, save a large amount of money, and graduate from a four-year college with the same degree as someone who started as a freshman directly.

"In addition, I believe attending DVC will help the student transition from a high school to a college approach towards education. You attend college because you want to, not because you have to. Diablo Valley College gives students the opportunity to adjust and mature in their approach toward getting a good education."

"The key," he identified, "is to remain focused, to utilize all the resources around you while at DVC, such as teacher guidance, the transfer center, counselors, financial aid, etc., and to be accountable for hitting the goals you set out for while at DVC."

"I've met a few people who have dropped out of four-year colleges or transferred out of Berkeley because the competition was too much," he continued. "They didn't get the attention that they needed. They didn't connect with support systems on campus.

Tablante emphasizes, "At DVC, the education is there. The support system is there. Take every advantage. Continue to strive. Don't lose sight that DVC enables you to become what you want to be."