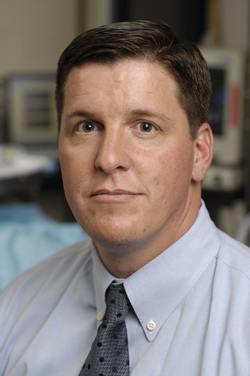 Ken Brady, MD, is an assistant professor of pediatric anesthesiology and pediatric critical care at The Johns Hopkins University School of Medicine.

Without DVC, he may have had a very nice career in construction, or possibly even as a high school teacher. But DVC caused his life to go in an entirely different direction.

"I hadn't intended to have the career I now have, partly because I couldn't have imagined it," Brady said. " I feel grateful for the faculty at DVC who maintain a standard that allowed that pathway to open for me."

He was 21, and without enough money or qualification to get into a larger four-year university. "I wasn't clear about my career goals, but I thought that being a high school teacher would be a good career, and I could continue doing construction part-time," Brady explained. " I liked construction, but the thought of an indoor job in the wintertime was appealing.

"I had heard that one could get a transfer into UC Berkeley as a junior after spending time at DVC, and that applications from DVC were favored. This seemed like a back door into the UC system that would not otherwise be available to me. That is why I chose to go to DVC."

His plan worked like a charm. "After finishing a base of coursework at DVC, my application was accepted at every one of the UC campuses for transfer," he said. "Isn't that a telling sign about the reputation of DVC within the UC system? I can guess that the reason has to do with the quality of the teaching. The curriculum was very well done, and taught to a standard rather than a curve. The standard was high and there is no doubt that I was well prepared at the transition, because I continued to maintain my GPA at Berkeley."

When the prospect of getting into a UC school became more real to Brady, he started imagining a wider variety of career opportunities. Partly because it seemed unobtainable, he said, he set his sights on medical school.

"I thought of medicine as the perfect career choice at the time- financial security, intellectual challenge and philanthropic potential all wrapped into the same package," he said. " Of course, this was a little naive, but there is still some truth to that simplified assessment."

He made numerous contingency plans in the event that he wasn't accepted into medical school. "I didn't understand the concept of school loans at the time," he said, so he thought he ‘had' to get into a UC medical school, where tuition was only $4,000 annually.

"I was nervous about the application," Brady admitted. " I knew that because my core curriculum was done at DVC, it would be factored down when compared against the competition that was mostly standard students. I knew I had to do well on the MCAT, and I couldn't afford a single poor grade at UC.

"My hardest course was physical chemistry, and when I got a C on the midterm I thought my chances were shot. I did every problem in the textbook after that, whether it was assigned or not, and with an A on the final, I salvaged my GPA."

He scheduled all of his classes on MWF for a semester and took all day Tuesday and Thursday to study for the MCAT. He took an entire (8 hour) test with a timer first thing in the morning, and didn't quit for the day until he had corrected all of the mistakes. After a semester of that he was getting perfect scores on the practice tests, and the real MCAT, he said, turned out to be easier.

During this time, he said, he had to keep working, but found ways to make the work more productive for his long-term goals.

"I tutored chemistry and became a ‘notetaker' for courses taught at UC," Brady said. " I would type notes from lectures and sell them to the note-taking services on campus, who would in turn sell them to the party-goers who couldn't make lectures. After typing the notes for each lecture, I had little studying left to do for these courses, and could trim back on the construction work because of the extra income."

With his high GPA and MCAT scores, he was well received in the UC system- but was rejected by UCSF, his first choice, without an interview.

"UCSF was considered the best at the time," he said, " but it was also the most difficult medical school to get into that year."

Undaunted, he sent UCSF a letter saying how great the school is, that it was his first choice, and- while he understood that they had other more traditional students with GPA and MCAT scores just as high- would they mind having a second look at his application before he packed up and headed to UCLA?

"To my surprise, they interviewed me and accepted me for admission," he said. "Nothing ventured, nothing gained."

Once in medical school, Brady said, "I found myself surrounded by intellectual superiors, well bred and groomed.

"I kept pace with the pack by force of will, and used my MCAT strategy for the national board exams," he said. " I landed a competitive spot in a residency program in San Diego, where I was one of four residents in combined Internal Medicine and Pediatrics training, and became board certified in both specialties.

"Choosing a specialty was not easy for me, because I liked so many of them," Brady said. "The decision was a complicated one, but for me the combined residency [in internal medicine and pediatrics] was a good fit. During that residency I had met and worked with pediatric intensivists who impressed me. They were the most dedicated physicians I had encountered. They worked under great stress and had a remarkable skill when it came to resuscitating a dying child. I still remember how awe-inspiring it was to watch them revive a child when I had already given up hope. I knew I would not be satisfied with my work unless I could have those skills.

That ICU fellowship was considered post-doctoral training and required an original publication, so Brady had time for research. He wrote and was funded for a grant to study the biochemistry of stroke in a vulnerable region of the brain. He was interested in neurotrauma, he said, because many of the patients who die in the pediatric ICU do so from neurologic injury. Cambridge University (UK) was developing a new method of monitoring the blood flow to the brain, and he wanted to study this method but at the time couldn't find the resources and backing to do so.

Nine years after medical school, Brady was finally done with training and started looking for a real faculty appointment. 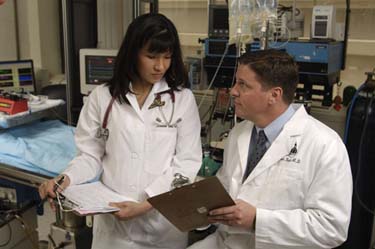 "The chairman at Johns Hopkins asked me what he could do to make me stay," Brady said, "and I told him I would stay if I could get support to study the Cambridge methods mentioned above. This was a risky thing for him, as it meant paying me a full time salary and a lab stipend for unfunded and unproven research." He asked Brady to write up the proposal with a budget, which he did, and after some reflection, the chairman offered Brady a year of support for the project.

That year ended successfully with their hypotheses almost all being fruitful. In the process of studying the Cambridge method, Brady said, "I developed a new method that has some attractive clinical features. We tried it in the lab, and surprisingly it worked the first time we did it. But I was skeptical, so I took the data to Cambridge and reviewed it with the experts there. They agreed that it was solid, so it has been submitted for publication."

Ken Brady is now a successful doctor and assistant professor with a bright, possibly groundbreaking future. He received the Hartwell Foundation's award for biomedical research, which included $100,000 in funding for three years. He was also named the 2007 Maryland Daily Record's Innovator of the Year for his work on the monitor mentioned above.

Was DVC the factor that led him to be someone making a difference?

Brady said, " I do think that the time I spent at DVC marked a turning point for me in terms of opportunity that has done nothing but cascade and amplify."