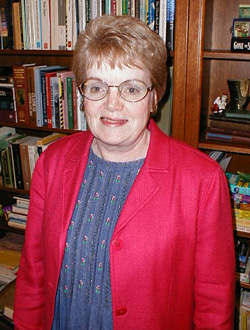 It took Marlene Bosanko 10 years to get from high school graduation to her A.A. degree in English from Diablo Valley College. But, she said, it was well worth the effort.

On June 11, along with Senator Derek Kilmer of Washington, Bosanko will receive an honorary degree from Tacoma Community College, where she taught English, served as English and Reading department chair, and was dean of arts, humanities, and social sciences before retiring in December 2008. She said the honorary degree brings her full circle from DVC, which gave her an excellent start on her educational journey.

After graduating from high school, Bosanko said, the journey to complete her A.A. degree took 10 years as she married, moved many times within four states, worked, raised two young daughters, struggled with a failing marriage and became a single mom. She served in the community, and was active in her church with teaching, leadership, and conducting both adult and children's choirs.

"My favorite classes at DVC were classics, literature of California, history of California, and geology," Bosanko said. "But it was when I received a ‘B' on an essay in classics that I knew I wanted to major in English."

While the classics course inspired her major, she said, the other three courses, which she took in a single term, "set me in good stead for designing and teaching coordinated studies later on."

"The A.A. degree was a milestone achievement that I once believed unreachable," she said, "and it marked the beginning of my lifelong commitment to education and to the humanities. One day at a time, sometimes one class at a time."

In the following 20 years, Bosanko earned both a B.A. and an M.A. in English from San Jose State University.

After that, she said, "I had the good fortune to be hired at Tacoma Community College in Washington, where I fulfilled my life's dream of paying back the gift of learning I received from Diablo Valley College.

After teaching at a Women's Correction Center, Bosanko was hired as an adjunct faculty member at TCC in 1983, and became a tenure-track English faculty member there in 1987. She taught developmental, pre-college, and college-level composition; a host of literature classes, including Native-American and multi-cultural literature, Shakespeare, and drama; and many coordinated studies classes with one or two other instructors.

"Food for Thought was one of my all-time favorite classes, and teaching linked classes (history, literature and film) was a high-water mark for me," she said.

She served for seven years as English and Reading department chair and as a faculty member in English and humanities, and then from 1999 to 2008, she served as dean of the largest division on campus. It included the arts (painting, drawing, photo, sculpture, and ceramics) and music (basic courses, vocal/choirs, instrumental/bands and orchestra, and computerized music); the humanities (communications, speech, humanities, film and theatre, world languages (seven of them), English literature, philosophy, and communications); and the social sciences (anthropology, psychology, sociology, history, and political science). She also supervised Tacoma Community College's free-standing art gallery.

"Think of it. I spent every day of the past 25 years doing what I loved most-learning with students and helping them reach their goals, seeing fine art, hearing beautiful music, attending excellent theatre, reading the great books of many disciplines, and serving in my church and in my community. No matter what field one chooses, the A.A. degree from a community college is the ticket to a rewarding journey through life.

"It's been a great life, and it all started at DVC."