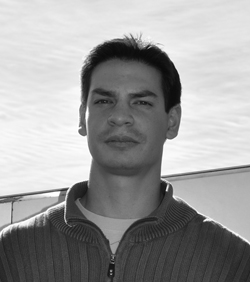 Former DVC student Michael Gong of Oakland has published a book, Gifts of Madness, a collection of poems and short stories that has been translated into five languages–English, Korean, Spanish, Chinese and Indonesian.

The book was published in September by Blurb, an independent press. “It was wonderful in the sense that I was given complete creative control over the project,” Gong said. “I designed the entire book myself, and was pleased with how closely it resembled my vision of what I had intended for it to look like.”

Gong, an English/Art major, was a student at DVC for three years before transferring to UC Davis, where he is currently a student. He wants to continue writing and creating art, and seeing where that path leads him.

“I would also like to teach creative writing and art at the University level,” Gong said. “I like the college-age mentality. I think it is here that students begin to look beyond themselves, at how they can positively influence the world around them. I would like to inspire others as much as they inspire me.”

Gong has endeavored to create artistic venues for readers since he was a child.

“When I was 12, I started a magazine and sold subscriptions to my parents and relatives,” Gong said. “Then, when I was 16, I wrote my first children’s book, with Dr. Seuss as my main influence. I continued writing and submitting my work to various smaller presses, and much of it was published.” This collection, Gifts of Madness, he said, compiles those works that were published alongside newer works that have never appeared in print.

“I guess books are just in my blood,” he said.

“In the creation of this book, I learned so much, about myself, about perseverance, about patience, teamwork, and how other cultures relate to America and the world,” Gong said. “I made so many new friends–lifelong connections–in the building of this book, and I am grateful for all of the translators who dedicated so much time.”

The book, he said, is about the celebration of art and literature through the unification of culture.

“I hope readers carry away with them not only wonderful stories to share and enjoy, but also the conviction that they themselves can accomplish whatever it is they set their minds to. Our generation faces serious challenges on the world stage, from global warming to clean water deficiencies to overpopulation, but if we make strides to bridge our cultural divides and understand one another, nothing can stand in our way.”