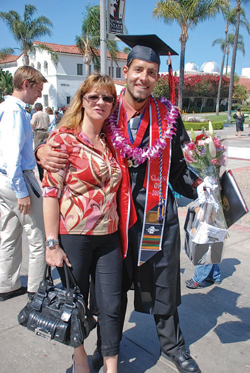 DVC graduate Niccolo Bodner (also known as Tyrell Lloyd) is a young man who has just realized one of his fondest dreams: he’s a filmmaker who just premiered his first film, Turnover, at the San Diego Film Festival on September 24.

The film is set in San Francisco in 2005, and recounts the life of basketball player Terrell Anderson, who played for City College of San Francisco and whose life was cut short just as his dream was about to come true.

Turnover, Bodner said, represents his beliefs, passions, and hopes for the future. “Being one of 75 films selected for the festival out of more than 1,200 submissions shows that my story has potential for moving minds,” Bodner said. “Seeing my film on the silver screen was very exciting, as it represents the accomplishment of extraordinary hard work with a good intent.”

Bodner was born in Germany of German and Sicilian parents. After graduating from high school, he earned a degree in computer science-software development. He enrolled at Diablo Valley College in 2005 to study film, and in 2007 was awarded associate degrees in CSU transfer studies and IGETC transfer.

While at DVC, Bodner was the DVC men’s basketball team manager, competed in persuasive speech, founded the DVC Yearbook Association and released DVC’s first yearbook through the club. He also worked on campus in the print shop, as the PBX night operator, and for central services at athletic events and doing setups on campus.

“DVC has outstanding faculty and a strong, demanding academic program,” Bodner said. “When I transferred to SDSU, I felt very superior over classmates that just transferred from other community colleges. I was well rounded and class assignments could be easily tackled. DVC faculty challenged me on all kinds of levels, while supporting my goals. The quality of education and open-minded climate helped me to think outside the box and to succeed in my endeavors.”

While attending DVC, he added, he was very fortunate to receive a lot of significant help from faculty and staff members. “DVC was like my second home for two years. I was always welcomed and well taken care of, and was given many opportunities and excitements. Overall, from basketball all the way to being the student voice during commencement 2007, I only experienced awesomeness. For me, going to DVC is like going home.”

It was while he was the men’s basketball team manager at DVC that Bodner learned about Terrell Anderson, a San Francisco City College basketball player who had been killed, and who is the subject of Bodner’s film.

“We played against City College in December 2005 without Anderson’s presence,” Bodner said. “When CCSF defeated DVC that night, I saw how all the players were mourning the loss of their friend, and I was asking myself how the mother must feel about the loss of her son. Terrell was a young basketball player who simply tried to follow his dream of becoming a professional basketball player. As a basketball lover and great supporter of other athletic programs, I am aware that sports often is the only hope that students have, because scholarships fund their education.”

Terrell’s death and another shocking incident, the Virginia Tech massacre in early 2007, came together in Bodner’s mind a year later at SDSU as he began work on his undergraduate final thesis short film. He wrote a screenplay that addressed the issues of bad choices and hate, basing it on the true incidents of Terrell’s story.

Pre-production and planning for the film started in July 2008, and it took a year to complete. Bodner has high hopes for its success.

“Now that Turnover has been selected for the San Diego Film Festival,” he said, “I have a dream of donating possible revenue from the film to the Terrell Anderson scholarship. Sales of festival DVDs, including possible distribution deals as well as potential donations, will help me to accomplish my goal to give back to the community, and support future students while honoring a player who died too soon.” The DVD is available for purchase by emailing Contact@TyrellLloyd.com.

Bodner currently is interning at a post-production house in Los Angeles. He has been accepted into the three-year MFA program for film production at the University of Southern California, and hopes to start there in January of 2010.

“Turnover,” he said, “is the calling card for my future, and hopefully a spark for many young adults. But without the support from faculty and staff at DVC, I would not be at the point where I am today.”