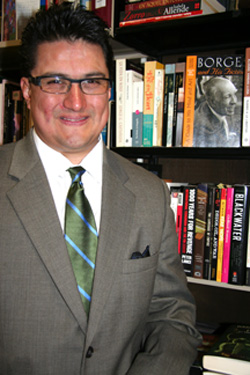 You never know, when you pick up a book, where it might lead you. Just ask David Vela, English professor at Diablo Valley College. At Thanksgiving time in 1998, Vela was visiting at the home of a friend when he picked up and read a book of short stories by Jorge Luis Borges, a noted writer from Argentina.

This summer, 22 years later, that book led him to Argentina, where he was invited to present a paper at the 10th annual (and final) international conference on Borges about the Irish literary influence on Borges’ writing.

When he read that first book, Vela said, “I was stunned at how compact and strange Borges’ stories were. They were written in a Spanish unlike any other Spanish-language literary work I had read; they had the imprint of the brevity and force of English. I noted this, I suppose, because I was bilingual. Later I found out that Borges’ father was half-English and that Borges grew up speaking English with his father and paternal grandmother, and that he did most of his reading in English, although he read avidly in French, Latin, German, Spanish, Italian and Portuguese as well.”

Intrigued by the author, Vela studied him and, in 2008, as a sabbatical leave project at DVC, finished the first draft of a book that focused on the Irish literary influences on Borges the writer.

“After finishing the draft,” Vela said, “I wrote to his widow, Maria Kodama de Borges, director of the Fundacion Internacional Jorge Luis Borges (International Foundation Jorge Luis Borges), thanking her for publishing works he tried to suppress—works that are vital to my thesis of Irish literary influence.

“She invited me to see his library,” he said, so he went to Argentina. “She allowed me access to his books, showed me pictures of him on special occasions such as his 85th birthday, allowed me to handle some of his canes (he went blind in his 50s but lived to be 86 years old), and told me intimate stories about him that I can’t and won’t publish. She trusted me with information that I find invaluable in understanding him and his writing, but which may not be appropriate for my book, which is a work of literary and cultural influence.”

Vela wrote a paper on Borges in 2009, which he presented at a conference in Morelia, Michoacan, Mexico. He pared that down, took a big chunk out of it and added other material in preparing the paper for this summer’s conference, “Borges and the Others,” in Buenos Aires. The conference was about Borges, he said, and while other authors were presented by scholars and writers, it was to compare them to Borges with respect to their literary works, in such thematic groupings as “Borges and philosophy,” “Borges and narrative,” and “Textuality and Borges.”

“I was writing my paper up until the last moment–something I don’t normally do,” Vela said. “Thank goodness it was received well. It was the only paper admitted in English– all of the others were presented in Spanish and Portuguese, although the languages for the conference were English, Spanish and Portuguese.”

Vela was in Argentina from August 22-30, and took his mother, brother and friend along. While the conference kept him busy, he did have time to do some sightseeing. He met a 98-year old writer, Elsie Rivera de Haedo, who knew Borges, and invited Vela and his party to her finca for a celebration of the anniversary of the national hero, general San Martin, in the town of San Miguel.

He also met a lawyer and his wife, Miguel Angel de Ferrari and Maria Alejandra (the lawyer is one of four people in Argentina who practices heraldry, and whose wife is related to English and Spanish nobility), who drove Vela and his party to the “Quinta Pueyrredon” that once belonged to Juan Martin de Pueyrredon, one of the major 19th century political figures, but is now a fine museum; to the Jockey Club of Buenos Aires; and to the museum “Arte Hispanoamericano Fernandez Blanco,” a “jewel of a museum” near the embassies at the edge of Buenos Aires.

“It was a very special trip,” Vela said, “and I was able to see many things even though the conference was an intense three-day affair.”

To be able to make the trip, Vela gives special thanks to his DVC colleagues—Ellen Kruse, Tom Hurley and Obed Vasquez for their encouragement and support, and Michael Wallensky, Nancy Zink, Patrick Leong, Nancy Malone, and Toni Fannin, not only for their encouragement, but also for covering the first week and a day of his fall term classes, which started while he was away. After 13 years of teaching at DVC, he said, “I learned about them and about their special gifts and methods which they employed in classes as diverse as Myth, Freshman Composition, Critical Thinking, and Early English Literature. They were very generous and supportive.”