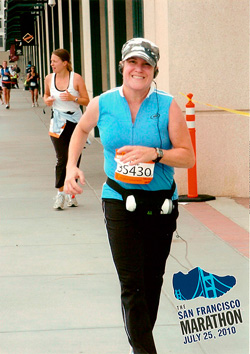 Jane Fisher, assistant professor in the Diablo Valley College art department, has a new take on fundraising. She runs. Not away from the problem, but in marathons, and she recently raised $865 for the art department in the San Francisco marathon.

Fisher, who has been teaching 2-D design, drawing and painting at DVC since 2006, said the art department is always in need of funds for supplies, and even more so with the recent budget cuts.

“We need new drawing horses for the studios, and there’s an area outside Room A102 that we would like to fence in to create an outdoor workspace,” she said. “We haven’t discussed things further, but there are always things we need.”

Fisher got interested in weight training and running about 20 years ago, mainly for health reasons. “Running is something I can do on the days I don’t have time to go to the gym,” she explained. “It also helps me collect my thoughts.” She ran her first marathon in July 2006 to raise money for the San Francisco AIDS Foundation.

In the recent marathon, she said, she sent out letters and emails asking folks to donate around $25 to $50. “Some people sent more, some less,” she said. “Most were friends or names on my art mailing list. A few people from school donated as well.

“It was an experiment on my part to see if anyone would be willing to help out,” she said. “I think running half-marathons/marathons can be an effective strategy, because many people think, ‘She’s crazy enough to run 13 miles. I might as well cough up a few bucks.’

“If anyone from another department does the same, I’ll be happy to donate. There are many organized runs and bike rides that encourage fundraising. Let me know and I’ll come along!”