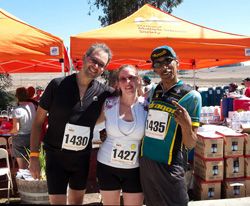 The ride is sponsored by the National Multiples Sclerosis Society of Northern California, and consists of a 90-mile bike ride over two days from Rohnert Park to Lake Sonoma.

“The first day, my team and I rode a 40-mile loop from Rohnert Park out toward Point Reyes,” Keating said. “The second day, we rode 50 miles, from Rohnert Park to Lake Sonoma. I completed the ride in the saddle the whole time—an amazing feat, considering not only that I had just three months of training, but that the weather was incredibly hot. It was over 90 degrees the first day, and over 100 degrees the second day.”

Keating said she will be riding again next September as the cause is close to her heart. “If anyone would like to join the Super Slugs next year,” she added, “we would love to have you.”