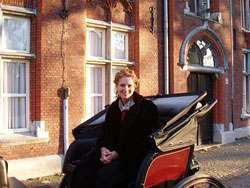 Mart Ann Irwin, a part-time professor of history at Diablo Valley College since the summer of 1996, has two new books and a journal article that will be published in 2011.

The journal article is “Sex, War, and Community Service: The Battle for San Francisco’s Jewish Community Center,” Frontiers: A Journal of Women Studies, Special “Gender and the City” Edition (coming in 2011).

“In 1974, I enrolled in a course called ‘The Black American in U.S. History’ at Mesa Community College in San Diego,” Irwin says. “It was a two-semester course that started with American slavery and ended with the Watts riots. The instructor was the very entertaining but thoroughly prickly Bob Russell, and I probably alienated him the first time I opened my mouth. But in the end, I found something that I could be interested in forever.

“Before that class, I had thought history was unspeakably boring. That went double for U.S. history. But when I took Professor Russell’s class, I realized my mistake. History wasn’t boring; it was the history books that were boring—all about people doing things I didn’t care about. I realized that I had always been interested in history, but a kind of history I hadn’t known existed, about those who lost the wars, who didn’t write the laws, who didn’t win the White House by a plurality of votes. I didn’t know the term until much later, but I had discovered something called ‘social history.’”

Irwin says she has no illusions about the role of the historian in the grand scheme of things. “The stories I tell aren’t going to save the polar bears or anything,” she admits. “But writing history means a great deal to me, personally. I love being able to throw out my net and find some story that interests me–some person or place or thing that, if others knew more about, they might find interesting too. If I am patient and careful, I can dig these fossils out of their obscurity and reveal them, as an archaeologist might use a fine brush to uncover relics long buried and forgotten.

“Perhaps,” Irwin continues, “I can make a reader say, ‘Oh, I get it—that makes sense,’ or even, ‘Well, that is just the dumbest thing I ever heard.’ Either way makes me happy. I get to be part of this long conversation we call history, a conversation that started long before I showed up and will continue long after I’m gone. It is a very low-key, not-too-flashy kind of immortality.”

Irwin is a member of Phi Alpha Theta, Kappa Phi chapter, the International honor society in history. In 1999 she won the Jensen-Miller prize for Best Article from the Coalition for Western Women’s History, and in 2003 was named one of six fellows for the “Jewish Women Building Community” project of the Jewish Women’s Archive, funded by the Myra Reinhard Family Foundation of San Francisco.

Irwin serves as an ex officio member of the steering committee of the Coalition for Western Women’s History, and is a member of the editorial board of the Pacific Historical Review (University of California Press). She currently is writing a history of San Francisco’s Emanu-El Sisterhood for Personal Service.

Among her published works:

Irwin lives in Oakland and volunteers with several local organizations, including Elizabeth House, an East Bay shelter for women and children; Save the Bay, the Bay Area’s oldest environmental action group; and Taproot Foundation, a volunteer-matching groups that connects writers, web designers, and other kinds of professionals with not-for-profits needing their skills. She has two children, son Zachariah and daughter Sarah (both exemplary) and two cats (who are very bad). Irwin says teaching and writing are ancillary to her real mission in life, which is collecting vintage hats.