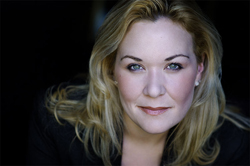 Nicole Diestler, professor of acting and directing at Diablo Valley College for the past five years, serves as the theatre columnist for the Pleasant Hill Community Focus newspaper. Her column, “Stage Door,” has two sections.

In the first section, “The Spotlight,” Diestler highlights educators, artists, and educational and regional theatre programs in the East Bay, to cover the people and programs that often are over-looked or under-represented by the larger media.

The second section, “Now Playing,” presents a listing of local area productions that are currently onstage and available for public attendance.

Diestler will make her first on-stage appearance in the Bay Area as Gertie, mother of the central character Claire. Fuddy Meers starts off as just another normal day for Claire, whose husband Richard patiently explains that she suffers from a form of psychogenic amnesia that erases her memory every night when she goes to sleep. In the morning, the wacky plot begins.

Prior to joining the faculty at DVC, Diestler had been working regularly on stage, in film and television in Los Angeles while commuting to serve as an adjunct instructor at Grossmont College and San Diego State University. She is also a private acting coach, has taught several acting and industry workshops in advanced theatrical styling and execution, and is a published playwright.

She holds several theatrical degrees and certificates, including a BA in Theatre Performance from San Diego State University and an MFA in Acting from Florida State University/Asolo Conservatory in Florida and London. She also trained at the Russian Theatre Intensive, Maxim Gorky Theatre, in Vladivostok, Russia.

Diestler is a founding member of San Diego’s Stone Soup Theatre Company, and is an active and current member of the Faculty Association of California Community Colleges and the Actors Equity Association.

The play Fuddy Meers will be directed by Trevor Moppin, DVC advanced theatre student, with Diestler as his advisor. The advisor works alongside the student director, coaching and providing guidance throughout the process, with the goal of providing a link into the world of professional acting, directing and technical theatre.