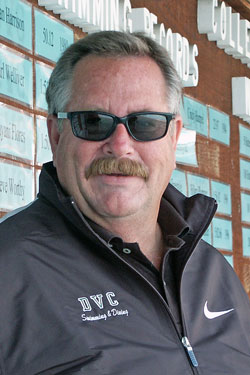 Rick Millington, DVC professor of physical education and head swimming coach, has been named the Big Eight swim Coach of the Year. His men’s swim team won the Big Eight conference title, and the women’s team placed third. Both teams won the right to go on to the state championships.

Millington is an alumnus of DVC, where he was a swimmer and water polo player. He was the MVP on the swim team in 1966 and was captain in 1967. He earned his A.A. degree before transferring to CSU Fresno on a water polo scholarship. He played water polo and swam at Fresno, and when his eligibility there was over, he transferred to CSU Hayward, where he earned his B.S. degree.

He has coached USA swimming since 1970, mainly with the Aquabears since 1980. From 1976 to 1981 he was the head coach at San Ramon Valley High School, where they won three Northern California titles and were the number one high school in the country in 1980.

Millington was Jack Flanagan’s assistant swim coach at DVC from 1971 to 1976, and from 1982 to 1986. He started teaching part time at DVC in 1982, becoming a fulltime instructor in 2001. He became the DVC head coach for men’s and women’s swimming and diving in 1996, and is also the head coach for women’s water polo.

“At DVC, I help the student athletes become the best swimmers they can be, to be strong students, transfer, and hopefully compete at the next level,” Millington said.

“I am honored to be the Coach of the Year,” he said. “I believe it means that my peers recognize the outstanding performances that our team had this season. It is a tribute to our team and our outstanding staff, as my assistants are a real key to our overall success.”

DVC President Judy Walters congratulated Millington, saying, “Your dedication to your profession of teaching and working with student athletes is being recognized in the designation as ‘Coach of the Year,’ and I, too, wanted to add my recognition of your work.”