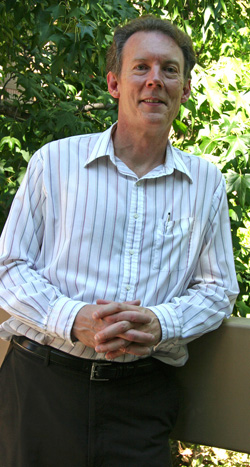 Robert Abele, DVC professor of philosophy, was asked and has written seven articles for publication in a new International Encyclopedia of Philosophy: Global Justice, which is published by Springer Press in The Hague, Netherlands, and is expected to be released by March 1 of 2011.

Abele was contacted by the Encyclopedia’s editor, who had read his previous publications and wanted him to write for the new book.

“These are encyclopedia articles,” Abele said. “As such, they present a distilled and synthesized synopsis of my research on the various issues and philosophers I have been researching that are of general philosophical and/or ethical interest.

“With the depth of research needed for these seven articles,” Abele continued, “it was like writing a new book. I was very excited to be asked to do this, and it proved to be very challenging, too. First, I have never been asked to write an encyclopedia article, and since the articles were on subjects on which I had done or was currently doing research, it was a good match for me. Second, getting the DVC name onto an international stage allows it to get the recognition it deserves as a class A-1 college. Since the project was a pro bono one, having the Diablo Valley College name associated with The Hague was motivation enough to do it.”

The topics on which Abele wrote and that were accepted are “Noam Chomsky and Justice,” “Jurgen Habermas on Language and Justice,” “The Hague Convention,” “The Geneva Conventions,” “State Terrorism,” “Torture,” and “Global Justice and the Invasion of Iraq.”

“The Encyclopedia is concerned with issues of justice, particularly global justice,” Abele explained,“and what is to be done to formulate our social and political institutions in the future, in a world of globalized economies and international agreements.”

All of the articles, Abele said, relate to the last two books he wrote. “All of my books seek to underscore the ethical principles and arguments that are involved in the political issues on which I write,” he said. “In the case of the Encyclopedia, each of the articles dealt with ethical and political issues and principles involved in globalization.”

On the topic of torture, Abele wrote: “One of the arguments Steinhoff makes in favor of interrogational torture is that it is a form of self-defense. Steinhoff analogizes this by comparing it with the movie Dirty Harry. In the movie, Harry, the police detective(played by Clint Eastwood)tortures a freshly-wounded kidnapper in order to get the criminal to reveal the location of his kidnap victim. According to Steinhoff, this criminal did not have the right not to be tortured, because the situation is analogous to self-defense. However, this is surely a case of “eye-for-eye” thinking, or in other words, retaliation for a wrong done. This would be very difficult to defend ethically, and certainly the logical conclusion from Steinhoff’s analysis. Even more, when Steinhoff argues that Dirty Harry makes his decision to torture the criminal ‘as an individual, not as an agent of the state,’ this is surely mistaken, since Harry does not cease to be an agent of the state until he throws his badge into the Bay in the last scene of the movie.”