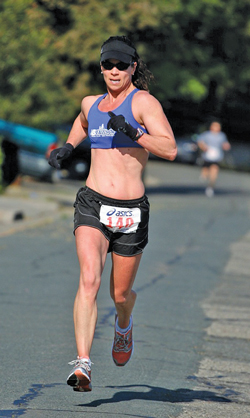 Shelly Pierson is an associate professor in sports medicine and physical education at Diablo Valley College. She is also a runner, and competes in 5K and 10K events.

“I have been running since I was 10 years old,” Pierson said. “I have had asthma and chronic bronchitis (Chronic Obstructive Pulmonary Disease-COPD) since early childhood, and as a young child, I had to take a lot of medication. Back then the research and knowledge regarding medications was not as good as it is today. Many of the medications had painful side effects, and I didn’t like taking them.

“One of my doctors had read some research showing that endurance activities could strengthen the lungs and lessen the occurrence of negative pulmonary episodes and attacks,” she continued. “My dad was a jogger, so I started jogging with him and my running really just developed from that point. I ran competitively in middle school and high school, and then ran in college at Cal Poly-San Luis Obispo on a full athletic scholarship. After college, I continued running at the national level for several years.”

Pierson proudly notes that she is a graduate of Alan Hancock Community College in Santa Maria. “The fact that I was able to run competitively in community college was a very necessary bridge to my life and my eventual successes and accomplishments,” she said. “Community college athletics gave me a second chance to make things happen both in the academic realm of my development and in my athletic endeavors. If I had not had that opportunity and been given the time to further develop my talent, I probably would not be who I am today. I am living proof that community college athletics produces successful individuals who have the fundamental desire to develop and succeed in their life undertakings.”

For many years Pierson ran competitively on a professional United States Track and Field (USATF) grand prix circuit. She ran 5K and 10K races straight out of college, and then graduated to the marathon in her late 20s to mid 30s.

“I would run anywhere from 60 to 100 miles per week, and 20 to 30 races a year, depending on the season,” she said. “Now that I am older, I only race in the spring/summer (March-August), and usually run about two races a month, depending on how I feel and how my training is going. I am just running races at the 10K distance or less, and I am going to focus on 5K races this spring.”

Last fall, Pierson won in her age group at the Devil Mountain 5K, a local race in Danville that benefits the Children’s Hospital of Oakland and draws a pretty competitive crowd. She also won the female overall 4-mile run in the Brickyard race, being the first female to cross the finish line, and set a women’s master’s course record of 26:17 over the four-mile course– an average of 6:34 per mile.

“The Brickyard race course is along the Carquinez Scenic Drive in Martinez,” Pierson said. “It is not straight and is very hilly– but has breathtaking views!”