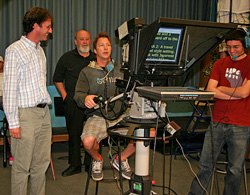 Tal Skloot, adjunct professor of film and broadcast arts at Diablo Valley College, will soon be on his way to Turkey for two weeks, courtesy of the U.S. State Department.

Skloot’s documentary film, “Freeway Philharmonic,” which follows the dreams, disappointments and successes of seven freelance classical musicians as they struggle to succeed in the arts, was selected as one of the films for the American Documentary Showcase (ADS). ADS is a major touring initiative that features prestigious U.S. documentaries, and is administered by the University Film and Video Association (UFVA) in partnership with the International Documentary Association (IDA).

The UFVA and IDA have curated a showcase of 25-30 award-winning American documentaries chosen to reflect the best in contemporary American documentary film making. They include 2008 Academy Award nominees “The Betrayal” and “The Garden,”and offer a broad, diversified look at American life and the values of a democratic society. Demonstrating their role as catalysts for dialogue and change, the films cover a broad thematic spectrum, including the environment and nature, America’s racial and ethnic heritage, immigration, the democratic process, work and labor, and American folk arts, among other topics.

Skloot, who earned his degree in film at The American Film Institute in Los Angeles, will leave Oct. 31 for Turkey, and will be going to Istanbul, Ankara, Eskisehir, and the Adana region.

American filmmakers and film specialists traveling abroad as part of the ADS program will introduce screenings of Showcase films, and will conduct workshops and other outreach at documentary festivals, U.S. Embassy-organized programs and other events.

According to Skloot, “ ‘Freeway Philharmonic’ follows seven San Francisco Bay Area freelance classical musicians as they perform with regional orchestras across Northern California while struggling to acquire a permanent position with a major symphony.

“It depicts their efforts to balance a love of music with a road warrior lifestyle that often requires traveling hundreds of miles a day to rehearse, teach and perform,” he continued. “These individuals have an unrelenting desire to perform for a living, sometimes at the expense of their family and well-being. The goal of the film is to show the dedication, perseverance and rigorous life of the musicians, while they grapple with their desire to succeed in a hard-driving career and come to terms with their limitations in their quest for artistic accomplishment.”

After three years of filming in the San Francisco Bay Area and a year and a half of editing, Skloot said, the film aired nationally on PBS in 2009. The filmmaker applied for the ADS program and was selected in a very competitive process.

Skloot has been at DVC for 11 years and said, “I love teaching at DVC. The students are smart and often produce intelligent and thought-provoking films. The diverse student body also allows for varied and interesting points of view, a real gift for a teacher. And of course, department chair Ken White has made teaching here a joy. His guidance and mentorship really make for a first-rate film department.”