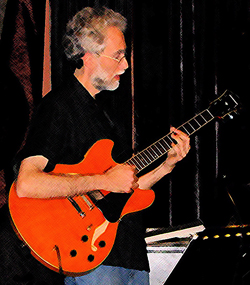 “I was so fortunate to be able to recruit these wonderful musicians to join me for this project,” Nirgiotis said. “This CD is the culmination of several years of working together, creating a very tight rhythm section, and getting to the point where we can really interact with each other and provide a whole that is greater than the individual parts. All the players in this group are equal partners as soloists and accompanists.”

The group features Nirgiotis on guitar, Leonard Sklar on tenor sax, Gary Monheit on piano, Dan Krimm on fretless electric bass, and Matt Willis on drums. The group draws on its members’ experience in a wide variety of musical forms, including classical, progressive, rock, Caribbean and Latin jazz, plus stylistic flavors– such as Indian and Hawaiian– gathered from around the world, to create a unique and eclectic jazz sound.

“The music on this CD,” Nirgiotis said, “is a blending of the spirit of modern creative improvisatory jazz with Latin jazz, Brazilian jazz, funk, fusion and the blues.” Critics say the quintet “plays jazz with rich harmonies, deep grooves and lots of improvisation and interaction as they cover a spectrum of styles.”

While not a musician by profession, Nirgiotis studied jazz theory at DVC with Rory Snyder, and gained a lot of experience participating in student performance ensembles for many years before moving on to form his own group. Last year, he brought his group back to DVC to perform at a music department fundraiser.

Find samples of the group’s new CD, where it can also be purchased or downloaded.

Nirgiotis and Fortune Smiles will be performing at Yoshi’s in Oakland on February 7.