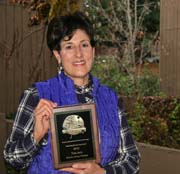 Tine Levy, long-time mathematics professor at Diablo Valley College, has been selected as the recipient of the 2010 California Mathematics Council for Community Colleges (CMC3) Teaching Excellence Award. The award was presented at the CMC3 annual conference in Monterey early in December. Levy was nominated by the DVC Math Department.

Levy earned her B.A. and M.A. in mathematics from the University of Wisconsin in Madison, and was, at the time, one of only three women accepted into the Ph.D. program in math and received a teaching fellowship. “It was an exciting time for me,” Levy recalled. “There were some impressive names on the math graduate faculty then.”

One term beyond her Master’s degree, Levy left and came to the Bay Area. “It was a good move, because after I left, my friends and colleagues called to tell me that a radical group, the New Years Gang, had set off a bomb in the Army Math Research Center’s building, which was next door to where I studied many late nights in Van Vleck Hall.”

After arriving in San Francisco, Levy worked first doing assembly language programming for satellite controls in a company located in what would become Silicon Valley. That was followed by early work assisting in computer-generated tutorial systems for elementary school children that was being pioneered by Honeywell Systems.

Her love of teaching during her fellowship at Wisconsin led to her getting involved in a very creative and inspirational program out of Lawrence Hall of Science, which was called Project SEED (Special Elementary Education for the Disadvantaged). The program employed Masters and Ph.D. mathematicians to teach underprivileged and minority elementary students algebra through a Socratic discovery approach in an attempt to bridge the achievement gap in math education.

“Eventually, all these roads led me in 1974 to Diablo Valley College, which has been my home for the last 37 years,” Levy said. “DVC has been a stellar environment for me to grow as a teacher and a person.”

She was involved early on in DVC’s Women’s Re-Entry programs, and was in the original task force group that created the “Expanding Your Horizons” conferences for middle school girls. Her collaboration with DVC psychology instructor Elane Rehr from the Re-Entry program led to creating the first DVC “Building Math Confidence” workshops to help students combat math anxiety. She served on the district’s sabbatical leave committee for almost 30 years, until this year.

At DVC, Tina has taught nearly all the math courses offered by the department, but more recently her focus has primarily been on beginning and intermediate algebra, college algebra, trigonometry, pre-calculus, calculus, and analytic geometry II. She has been a major force in creating many of the math department’s online courses. She also wrote two textbooks for the Arithmetic Program, and one of them was used for many years by other community colleges around the country. Her work online encouraged her to move beyond the program to create Camtasia videos to help explain many concepts to her students, and she just recently completed a set of those videos to go along with a Pearson textbook in elementary algebra.

Levy also served as a consultant for a local educational software publisher, correcting and rewriting several of their mathematics DVDs for elementary, middle and high school. She reorganized and corrected most of their mathematics titles, and was the recorded voice for all the content on many of the DVDs.