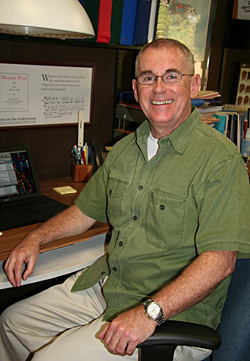 With more than 700 departments of English and divisions of humanities in its membership, the ADE has functioned since 1963 as a project of the Modern Language Association, an international organization of scholars and professors in English and the other modern languages. The MLA was founded in 1883 and promotes the study and teaching of language and literature. It is the principle professional organization for English scholars and teachers.

“The Association of Departments of English is affiliated and works closely with the MLA,” Hurley explained. “ADE’s focus is on organizational, curricular and other matters of concern to English departments at all levels of higher education. Its members are primarily chairpersons and sometimes others who hold leadership positions in English departments.”

The ADE is led by a 12-member Executive Committee, whose members are elected for three-year terms of service in each of its four divisions – two-year colleges, public and private bachelor’s and master’s granting departments, and doctorate-granting departments. The ADE president is appointed by the members of the committee’s outgoing senior class from members of the incoming senior class.

Hurley is currently serving the second year of his three-year term on the Executive Committee. He will assume the presidency on January 10, 2011, after the MLA annual meeting in Los Angeles, and will serve until after the MLA meeting in 2012 in Seattle.

“I’m very honored to be selected by my Executive Committee colleagues to serve as ADE president from January 2011 to January 2012,” Hurley said. “Drawing on my experience as a teacher of writing and literature over the past 40 years, as the learning center director at Simmons College in Boston from 1993 to 1995, as English Division chair at DVC from 1999 to 2002, and as President of the English Council of California Two-Year College from 2005 to 2007, I hope to promote stronger relations among English departments at two-and four-year colleges and universities. I’m particularly concerned about curricular issues–such as the relation between English majors and lower-division courses– and the preparation of graduate students for teaching English in two-year colleges.”

The ADE Executive Committee meets twice a year, once in New York at MLA headquarters, and again at the MLA convention held every January. In addition, each year ADE offers two Summer Seminars for English department chairs, one on the east coast and one on the west coast.

As a member of the Executive Committee, Hurley’s duties are to plan ADE-sponsored activities at the MLA convention, plan the Summer Seminars, address matters relating to English departments and the profession as a whole, and make recommendations to colleagues in ADE and MLA.

As president, Hurley will establish the agenda and preside at meetings of the Executive Committee, represent ADE at selected sessions during the MLA convention, and attend at least one of the two seminars for departmental administrators that the association arranges each June.

David Laurence, director of the MLA Office of Research and ADE, said of this honor, “Professor Hurley’s appointment as President of ADE signals the high respect in which he is held by his peers on the ADE Executive Committee and in the wider ADE membership.”