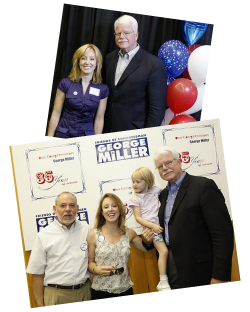 When Adrienne Ursino graduated from high school in Fairfield, Connecticut, she really didn’t know what she wanted to do with her life. But her family had just moved to California, so that fall she enrolled at Diablo Valley College, intending to take general education courses necessary for transfer to a four-year university.

Then things got a bit complicated. She was at DVC until 1996, when she moved to Boston and attended Northeastern University for a term. Then she ended up moving back to California and was back at DVC, where she completed her transfer requirements for San Francisco State University (SFSU). In 1998 her parents left California to go back to the east coast, and she moved to New York to be with them awhile, taking a few electives at Rockland Community College while there.

But it was at DVC that she figured out what she wanted to do.

“While in college, I attended school during the day and waited tables in the evening and on weekends,” Ursino said. “During my last term at San Francisco State, I took an internship course which led me to Congressman George Miller’s office. I earned credits while interning for Cong. Miller, and also learned a great deal about the practical aspects of working for a Member of Congress.”

After graduation, she landed a full-time job with Miller’s office, moving to Washington, D.C. and starting there in August of 2002. She worked on Capitol Hill from 2002 to 2004, then moved back to California. She currently works as Miller’s District scheduler and helps coordinate his California schedule. She also helps to coordinate events to be covered by Miller’s California staff while he is in Washington and unable to attend.

“There is always something happening in the 7th Congressional District,” Ursino said. “On average, we receive about 70 invitations a month. Cong. Miller’s ability to attend events in California is based on the House of Representatives’ voting calendar, which is determined by the Majority Leader of the House. When the House is ‘in session,’ Cong. Miller is required to be in Washington, D.C. But he flies home nearly every weekend to meet with constituents and attend events.”

Ursino attends several events each year, and often gives brief remarks on behalf of the Congressman or presents certificates or letters of recognition. “We coordinate with our DC office and oftentimes bring materials with current legislative information to give to the audience.

“What I like most about my job,” Ursino continued, “is that I learn something new every day. The average congressional district has 647,000 constituents. Therefore, we field a wide variety of questions, complaints, problems, and invitations on a daily basis. I like to think of our office as a large reference guide for our constituency. The DC office works primarily on legislation to be considered by Congress and on coordinating federal assistance to projects in the district, while the district office works one-on-one with the constituent to address his or her specific issue. As a staff person, I can help to make a difference in someone’s life, and that is what I really enjoy.”

DVC, Ursino said, afforded her the opportunity to find her true interests and what she wanted to study.

“DVC’s class catalog offers a broad range of classes in a variety of subject matters,” she said, “which is a wonderful asset for students who may not know exactly what they want to pursue later in life. Three teachers at DVC were very instrumental in helping me to find my niche. Mr. Reeves, an English teacher, opened my eyes to the importance of professional writing and messaging. Mr. Adler, U.S. history, helped to make history exiting and interesting while teaching the importance of staying on top of current events. And Mr. Wilhelm, physics teacher, used a variety of world cultures to help explain physical science in relation to spirituality.

“DVC is a great school with excellent instructors and a world-class campus,” she continued. “Even if you don’t know exactly what you want to be ‘when you grow up,’ DVC is a great way to expand your vision of the future. DVC’s excellent instructors were very accessible after class and willing to assist you when needed. The class sizes were very manageable, and I never felt like a number on a roster. The broad range of electives gives you the opportunity to take many different types of classes. And, of course, the cost makes it a very affordable option for those seeking higher education.”

To high school seniors contemplating their future, she added, “College offers an experience unlike any other, and will really prepare you for the workforce and life in general. College gives you the opportunity to participate in a higher level of learning, teaches you how to manage your own schedule, broadens your outlook on life through education, and forges relationships and friendships.”

Some of those friendships, she added, like the ones she made while competing on the DVC Diving Team, will last through your lifetime.

For the immediate future, Ursino plans to continue to work for Congressman Miller. “But,” she added, “who knows? Maybe one day I’ll run for office!”