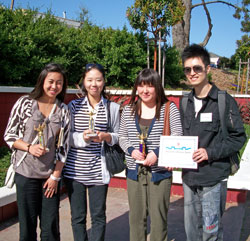 Yuri Sato, a DVC student of Chinese (CHIN 121), won a first place in the 35th annual Mandarin Speech Contest in San Francisco, sponsored by the Chinese Language Teachers Association of California (CLTAC), whose goal is to promote Chinese language teaching and learning in California.

The contest was inaugurated in 1962 by three professors, K.Y. Xu, Leo Chen, and Maurice Tseng, all of San Francisco State University. It has evolved over the years into its present-day form, and just last year added the categories of immersion program, bilingual program, and advancement placement students. It is the largest and oldest event of its kind in the United States.

Special recognition is given to DVC instructors of Chinese, Gong Tian, Linda Guo, Peggy Dean and Young-Ming Wu, for their help in preparing the students for the contest, and to instructor Lily Miao for her coaching and Sheree Lin for her involvement in the CLTAC.