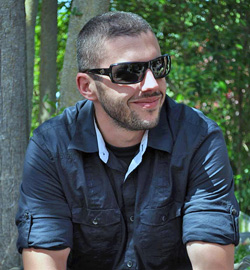 It’s a long way from the battlefields of Iraq to the classroom at Diablo Valley College, but Recon Marine Chris Clark of San Ramon made the leap—with help from the Veterans Club, and he’s now moving on to Stanford University.

Clark has seen a lot of life for a college junior, and it has given him a strong purpose and focus. He chose Diablo Valley College to help him achieve his goals, and just completed four semesters at Diablo Valley College with a 4.0 GPA. He is transferring in September to Stanford University, and will also be married in July.

Born in Long Beach, Clark grew up in the Bay Area, graduating from California High School in 2004, though he admits he was not a stellar student. “I grew up with an unstable family, and was in and out of various legal guardianships throughout my childhood,” he explained. “This largely contributed to my lack of academic achievement when I was younger.”

Upon graduation from high school, Clark joined the Marines and served from August 2004 to August 2008 in the Reconnaissance section of Special Operations, including two tours in Iraq, with 1st Reconnaissance Battalion. This included urban and zone reconnaissance, helicopter operations, direct action raids, and high value target detention. During his first tour in Iraq he was awarded the Purple Heart for taking shrapnel from a suicide bomber in the Al-Anbar province. He was promoted quickly and attained the rank of Sergeant prior to his discharge in 2008.

Clark enrolled at Diablo Valley College while still in the Marines, and started classes two weeks after his discharge from the service. He chose DVC because it was close to home, but said, “I couldn’t be happier with my experience at DVC. I encountered great faculty and great students.”

He was involved with the veterans club at DVC, which, Clark said, “is a great way for veterans to adjust to student life. The transition from military and combat to one of academics is often very trying. We try to ease that transition as much as we can by providing the forum through which veterans can connect with one another, gain insight, and prepare for a brighter future as they merge into the next chapter of their life.” Clark also wrote articles for and about veterans for the student newspaper, The Inquirer.

Also while at DVC, Clark interned for Congressman George Miller, was published nationally through New America Media, and, during the summer of 2009, volunteered in Thailand at an orphanage for children who were either victims of or at risk of human sex trafficking.

Clark’s major is political science. “I grew very interested in politics while in the Marine Corps,” he said. “After serving two tours in Iraq, I began to see how the decisions made by our policy makers impacted my life.

“I applied to a variety of universities– UC Irvine, UC San Diego, UC Los Angeles, UC Berkeley, University of Chicago, Dartmouth, and Stanford,” he continued. “I was accepted to all of them, and chose Stanford because it is undeniably one of the best research and academic universities in the world.

“I saw war through the most elite Marine Corps unit,” he continued, “and my desire now is to study the very thing I lived through the most elite intellectuals on the subject. I am deeply intrigued and excited about the level of faculty that Stanford offers. While this can be said for some of the above-listed universities–especially Chicago and Dartmouth– I decided on Stanford because, in my opinion, it is an outstanding school. That being said,” he added with a chuckle, “my soon-to-be wife wanted Stanford based on the weather! They also offer great financial aid and a wonderful study abroad program, where I plan to go to Oxford for a month to study politics.”

Is he ready for Stanford?

“I do feel prepared for Stanford,” Clark said. “DVC has helped me tremendously in that I learned how to be a student again. I learned how to transfer the leadership I learned in the Marine Corps and in combat, and to really succeed academically. While the curriculum may not be as challenging as what I am about to encounter at Stanford, DVC helped me transition from the military to student life.

“I would especially like to thank Dennis Franco (counseling), Ted Blair (political science), Nicola Place and Sara Boland (Career center) and Noha Basilious (veterans’ services) at DVC. All of these people were great resources for returning veterans, and really bent over backwards to help me and all veterans at DVC. They and people like them are what makes DVC a great place for veterans. Without their encouragement and support, I would likely find myself attending a very different school than Stanford.”

Clark’s goal–as of now– is to earn a JD/MBA through a dual degree program. “I plan on applying to Stanford, Harvard, Yale, and University of Chicago,” he said. “After that, I plan to go into either business or law, and devote a lot of my time to an organization known as International Justice Mission.

“As a follower of Christ,” he continued, “my priority will always follow along the lines of ‘sacrifice before self.’ Being a Recon Marine, surviving two tours in Iraq, and going to Stanford University are all things that I could not have done without having a strong faith in God and applying a biblical perspective to whatever I do.”