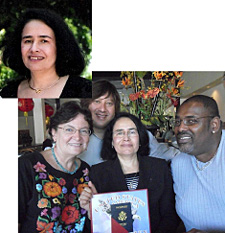 On July 29, 2010, Delmy Avelar of Pittsburg achieved one of her most precious dreams. At the Paramount Theater in Oakland, she received her Certificate of Naturalization, proudly took the oath of allegiance, and became a United States citizen. She was joined in this celebration by faculty from the Puente Project and staff from Diablo Valley College.

Her first taste of the United States came as a young woman in 1985, when she traveled on a tourist visa to San Francisco to visit her sister.

“I was living in the capital, San Salvador, with my mother, two sisters, a nephew age 11, and a niece age 13,” Avelar said. Her father had died when she was 10.

“There was war throughout the country, and in November of 1989, terrorists attempted to take over the Capital. They broke down our front door and took over our home. The Salvadoran Army was not able to control them because they had taken so many homes in the surrounding neighborhoods.

“We were not able to leave our area,” Avelar continued. “I stayed with my neighbor, who had a two-story house, and there were many of us there, hiding on the first floor of the home. The second floor protected us from the gunfire, artillery, and military action constantly going on. We were under constant surveillance by our captors, and were threatened and told we had to support them. We had no food, and all utilities were cut so we had no electricity or water.

“When the Air Force found that the terrorists were in our neighborhood, helicopters were sent and bombs were dropped, making it a war zone. This went on for 10 days, and many homes were ruined. Fortunately, my home stayed fairly intact, but it was bombed and the roof was ruined.

“Finally,” Avelar said, “the terrorists gave up when the military surrounded the entire area with tanks. Civilians were told they were free to leave the area, but the terrorists– who usually dressed in military fatigues– changed to civilian dress and escaped with the local residents.

“I left at the same time. Everyone had to leave so that homes could be checked for bombs, and the bodies of those who had died in the battle could be collected. Many people were buried in the same grave. I stayed at a friend’s house for a month before returning. The area was destroyed, but even though I felt panic, there was no alternative but to stay in that house and repair it.”

It wasn’t long after that, in 1990, when Avelar filed for a tourist visa and again visited her sister in San Francisco in an attempt to overcome that experience. Her sister, appalled at Avelar’s state of agitation, filed a petition for her to move to the United States. While she was here, Avelar attended Mission Community College, earned her GED, and studied English. Then, four months after arriving, she returned to El Salvador.

It took 12 years, but Avelar’s petition was finally approved in 2002. There were many requirements she had to meet in El Salvador before she could return to the U.S., but finally, in October 2003, she moved in with her sister, who was now in Pittsburg, and began her residency here.

Avelar enrolled at Diablo Valley College in the spring of 2005, beginning her studies with English as a Second Language, then moving on to the mathematics sequence required for her major. She has now completed English composition and critical thinking, as well as the accounting coursework for her major in business.

In November 2006, she began a work-study position with the DVC Puente Project, which she says has been very important in allowing her to grow as a student and as a professional.

“I am very grateful for all the opportunities and support Diablo Valley College has provided,” Avelar said.

Why was it so important for her to become a U.S. citizen?

“I have decided to live here the rest of my life,” she said, “and becoming a U.S. citizen is the only way to guarantee the right to remain in this great country. But I also want to visit my family, who still live in El Salvador (her mother died in 2009, but four sisters and one brother are in San Salvador). As a permanent resident, I was always at risk of losing my green card if I spent too much time outside the U.S. With U.S. citizenship, travel is easier. Also, there are many opportunities here, and as a citizen one can participate more and vote! Having a voice in government is very important to me.” Because El Salvador is one of a few countries that allows it, Avelar holds dual citizenship in her native country and in the U.S.

Had she considered getting educated here and going back to El Salvador to try to help her country?

“El Salvador continues to be a dangerous place,” she said. “The violence due to corruption and gangs continues. The kind of intervention it needs is well beyond anything I can affect. I love El Salvador, yet given my experience, I fear to live there. When I decided to change my life and pursue opportunities in the United States, it was with the intention of staying here.”

What advice can she offer to others who have come to the United States seeking a better life?

“First,” she said, “study English, learn it, and become a citizen. It is important to obey the laws and do all that is possible to make your life better, and make the best of opportunities that present themselves.”

Avelar continues to study at DVC. She has completed the certificates for bookkeeping and business essentials, and is taking general education courses for her planned transfer to CSU East Bay.

“I would like to work in a corporate environment that helps the community,” she said. “I have work experience from El Salvador, as well as through work-study here. I have gained business skills that I feel would be a good contribution to a company. That is part of my dream.”