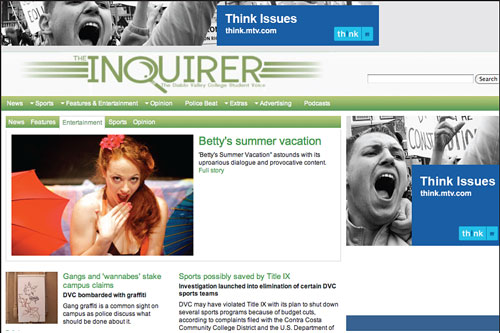 Ariel Messman-Rucker, the Inquirer’s editor-in-chief, won a General Excellence award for her four-part series on the 60-year history of DVC’s student newspaper. The series featured interviews with former faculty advisers and “generations of former Inquirer staffers . . . found as nearby as the Contra Costa Times and as far away as Baghdad and Kabul.”

The first story in the series ran Oct. 15, 2009, and covered the Sept. 28, 1950 debut of the East Contra Costa College Newsletter, a sheet of paper folded in half, and ended with adviser Brian McKinney’s era (1969 to 1976) when Inquirer was spelled with an “E.” McKinney was interviewed for the story within days of learning he had cancer; he died on Dec. 3, 2009, one week before publication of the final installment.

Honorable mention awards were won by Messman-Rucker for one of her many news stories on the DVC grade scandal; by Christian Villanueva for his feature profile of Zenon Davis, a multi-talented 14-year-old DVC student; and by Christopher Long, co-editor of the Inquirer’s online site, for an editorial cartoon he drew under deadline conditions in an on-the-spot competition.

Seven Inquirer editors and reporters attended the conference, which featured speeches, workshops, and individual critiques by professional journalists, including several Pulitzer Prize winners. According to organizers, it was the largest such conference in JACC history.