Members of the Diablo Valley College Kendo Club recently won third place out of 15 teams in the Annual Intercollegiate Invitational Kendo Tournament hosted by the University of California Los Angeles.

According to adviser Akihiko Kumakura, a part-time instructor of Japanese at DVC, kendo is a form of the Japanese martial art of swordsmanship, which has hundreds of years of tradition. Though it is not a major sport in the United States, there are many kendo practice gyms, called dojos, in the Bay Area, and many schools – most of which are state universities – have kendo clubs. UCLA’s club has about 40 participants.

The DVC kendo club was founded in October 2008, and currently has about 10 active members. Although it is a relatively new club, some of the players had kendo experience in their home countries, and six of the club members are “dan holders,” the equivalent of holding a black belt in judo or karate. 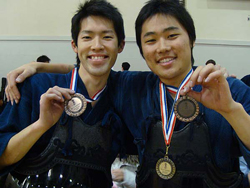 In 2009, the DVC club placed second in the UCLA tournament team event, losing only to UCLA in the finals. This year, five DVC club members – Toshihiro Watanabe, Kazuyo Hieda, Hideto Shimizu, Minsoo Ha, and Kenichi Nakayama – participated in the team tournament and won third place out of 15 teams, winning medals for the second consecutive year.

Kenichi Nakayama, club captain and a three-dan holder, also won the gold medal in the individual tournament, placing first out of 37 participants.

In addition to competing, the club members have been ambassadors for DVC itself.

“The team members have been spreading the DVC name in southern California,” Kumakura said. “Last year, many participants, judges and guests did not have any idea where DVC is located or what DVC stands for,” he said. “This year, many people at the tournament recognized the name, and our kendo team members lived up to the reputation they themselves created last year by earning medals in both team and individual tournaments. I am sure that even more people in southern California now know the name of Diablo Valley College. I am very proud of the team members for their hard work.”