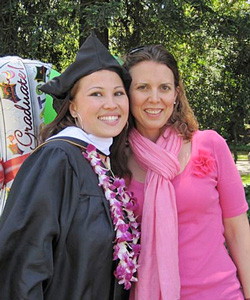 Mercedes Alfaro was a senior in high school when she learned she was pregnant. Her mother, after having moved the family around a bit, had finally bought a house in Concord. Being a single parent herself, Mercedes mother was trying to support five children of her own and had little income.

“I decided then that I needed to plan for my own and my baby’s future,” Alfaro said, “so I decided to enroll in college.”

Alfaro graduated from Westmoor High School in Daly City in 2004, but now in Concord with her mother, she decided to enroll at Diablo Valley College the fall of that same year. She was five months pregnant when she began her college classes.

She was able to attend her classes up until the last two weeks of the semester. “My son wasn’t due until December 21, but he came on December 8, just after my 18th birthday,” Alfaro said. “I called all my teachers from my hospital room the day after my son was born to let them know I couldn’t make my finals. They were all very accommodating. Luckily, I had done well in my classes and passed all of them.”

She took a break from college in spring 2005 to bond with her son, and then enrolled in two classes during the summer, continued part-time in the fall of 2005, and by the spring of 2006, was ready to enroll as a full-time student again.

“I was very young and pregnant when I first enrolled at DVC. It was very difficult, because I felt as though I was thrust into an environment that I was completely unfamiliar with, and I had no real sense of what direction I wanted my life to take,” Alfaro said.

“I can’t remember exactly what semester I started with CalWORKs and EOPS/CARE, but I’ll never forget how I found the program,” she continued. “I was going from building to building one day, trying to find as much information as I could about any resources or services that were available. I had no income whatsoever at the time.

“I came to the CalWORKs office, where I first met Dona DeRusso, who told me all about the CalWORKs program and how it could help me and my son,” she said. “Dona also told me about EOPS/CARE, and I quickly enrolled. Had I not been involved with those programs, I don’t believe I would have lasted in school.

“The book vouchers helped me pay for books,” Alfaro explained. “I received vouchers for supplies, and even stipends to help me with child care. Not only did the program help me financially,” she said, “but it also helped me emotionally by providing support. I cannot recall how many times I went to Dona or Emily’s office sobbing because I was so overwhelmed,” she said. “No matter how busy they were, they always lent me a shoulder to cry on, and listened to all my frustrations and concerns.

“The staff and my peers from the EOPS program truly helped me cope with being a new mother and a student,” Alfaro continued. “The parent support group was a wonderful, safe place to express fears, frustrations and joys of being a parenting student, without feeling as though judgment was being passed.

“Every person on staff had a hand in my success, because without the EOPS/CARE and CalWORKs programs, I feel I would have gotten lost in the crowd, and eventually given up on myself. I will be forever grateful for those wonderful people I met, their encouraging words, and the lifelong friendships I made.”

At DVC, Alfaro completed the general education requirements to transfer to a four-year institution, and transferred to Mills College, starting classes in the fall of 2007.

“I became pregnant with my second child while at Mills,” she said. “My daughter Leyla was born in March 2009, and after a week, I returned to classes with Leyla.”

Alfaro graduated from Mills College on May 15, 2010, earning a Bachelor of Arts degree in sociology. She currently works as a family advocate in West Oakland for the Spanish-Speaking Unity Council’s Early Head Start Program.

“I enjoy working with the children and their families,” she said, “helping them with their struggles, and teaching them to become their own advocates.”

As for her own children, Alfaro said. “My son Dominic became used to college life, attending classes with me when necessary. He saw me studying constantly, and I believe he felt that my going to school was a normal part of his life.

“I want both my children to know that anything is possible as long as you work hard and keep your eye on your goals,” Alfaro said. “I don’t want to give them a false image that life isn’t hard. It is. They will struggle and stumble a few times, and may even make poor choices at one point or another. But I want them to know to seek out help when they’re struggling or feel like giving up. There is no shame in asking for help. I wouldn’t be where I am today had I not walked in to the EOPS and CalWORKs office and asked for help. I will forever be a supporter of these programs.

“Although I found the program by chance,” she continued, “it was the best thing that could have happened, because they guided me throughout my years at DVC, until I felt confident enough in my own abilities to seek out what else life had to offer me. I want my children to know that, despite life being hard, there are wonderful people out there, such as Emily Stone and Dona DeRusso, who helped me realize my potential and encouraged me to have big dreams. These people can make life seem less hard and help give you the confidence to have a positive outlook on life, no matter what kind of past you may have had.”