As a teenager, Michael Galvez didn’t think much beyond his next break dance or his next day at work. He wasn’t thinking about the future. Then he enrolled at Diablo Valley College, and it helped him turn his life around.

Galvez grew up in San Francisco, and then moved to Walnut Creek, where he attended Northgate High School, graduating in 2000.

“I had worked in retail and as a manager at a fast-food restaurant throughout high school, not really having direction and performing poorly at school,” he said. “I was probably focused mostly on break dancing and ‘hanging out’ back then. I saw my classmates begin to transition into universities, but I had fallen behind academically and did not have the grades to even apply. I chose DVC because it had the best reputation for transferring students to UC and state universities.

“DVC allowed me to start from scratch, learn to study, and eventually to excel academically,” Galvez continued. “I started with Introduction to chemistry as my first science course, with Dr. Ulrich and Dr. Rusay. Taking this class was a huge step for me, from not knowing how to study to excelling and really taking academics seriously. I went from getting C’s in high school science and math courses, to getting all A’s with the help of professors, tutoring, other students, and my own hard work.”

While attending DVC, Galvez got a job at the Joint Genome Institute, a DNA sequencing facility in Walnut Creek, which helped him focus on a career. Seeing a future in the sciences further encouraged him to succeed in his coursework. After two years, he transferred to UC Berkeley to major in molecular and cell biology, with an interest in eventually going to medical school.

While at Berkeley, Galvez realized that he wanted to help others who faced academic challenges similar to his. With fellow students, he helped run a mentorship program that matched up undergraduates with underserved middle school children from the Mission District in San Francisco.

After earning a B.A. degree in molecular and cell biology from UC Berkeley in May 2004, he realized that he needed to delve further into discovering what a career in medicine entailed.

“I began working full time at UCSF doing basic science research in emphysema and pulmonary fibrosis with the Department of Pulmonary and Critical Care Medicine. Having grown up uninsured with poor access to health care, I have always had a personal drive to provide better access and care for the underserved. I taught STD/HIV prevention at a Boys and Girls Club in San Francisco that I had previously attended as a child.

“To further my understanding of clinical medicine,” he continued, “I volunteered at the San Francisco General Hospital emergency room, and did clinical research with the UCSF Department of Neurosurgery. After all these experiences, I finally felt that I was ready to start medical school.”

He was accepted and enrolled at the Stanford University School of Medicine in June 2006, where he is now a Doctor of Medicine candidate with a scholarly concentration in bioengineering, with an anticipated graduation date of June 2011.

“Last year I completed the Howard Hughes Medical Institute Research Fellowship, a dedicated year of research supported in part by the National Institute of Health. I continued my commitment to the underserved, serving as the screening coordinator at the Arbor Free Clinics, helping screen more than 1,500 patients in the south bay for high blood pressure, diabetes, and high cholesterol. I also continued my commitment to mentorship through the SUMMA Medical Mentorship Program, which links medical students with underserved undergraduates.

Galvez’s interest in supporting universal healthcare helped him to reinitiate the chapter of the American Medical Student Association, dedicated to improving access to health care. And through his interest in surgery he became involved in running suturing workshops for undergraduates and medical students, as well as working with Operation Access, a nonprofit that provides access to surgery for the underserved. 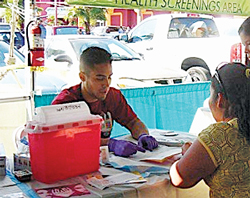 Galvez is currently a full-time clinical student rotating at several hospitals in the south bay, and will soon be applying for residency. He laughingly admits he has little, if any, time for break dancing these days, though he occasionally comes out of “retirement,” even performing for a medical school talent show. In spring 2010 he will be helping coordinate and translate Spanish for a two-week surgery mission to La Paz, Bolivia.

“Looking back,” he said, “DVC was an amazing place to restart academically. Besides my own drive to succeed, the personal teaching and encouragement from professors and the small groups with my fellow students really solidified my good habits and my positive outlook on eventually getting a college degree—and now medical school.”

What are his plans after medical school?

“I plan to pursue a career in academic (research and teaching hospital-based) surgery, specifically in either pediatric or plastic/reconstructive surgery,” Galvez said. “Through my personal experiences and through surgical/medical training, I hope to become a surgeon who contributes not only to patients on an individual basis and in the laboratory, but one who is able to look at the larger picture and help create sustainable programs here in California and globally, in hopes of promoting equal access to health care.”