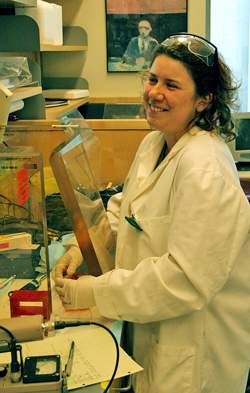 Monica Rodrigo-Brenni is currently a postdoctoral fellow at Fundacion Ciencia para la Vida in Santiago, Chile. Her path started in Chile and took her through Diablo Valley College.

Rodrigo-Brenni was born in Chile, but was orphaned as a teenager. In 1994, she moved to Albany, CA to live with relatives, and graduated from high school there in 1997. She then attended Diablo Valley College from 1997 to 1999, transferring to UC Davis to major in biochemistry.

“I think DVC was the best choice I could have made,” she said. “All my classes were great and I had a wonderful experience. The best part is the quality of the professors and the small class size. I think DVC provided a great science foundation that allowed me to pursue my love of biology and chemistry, all the way to a PhD.”

Curious even as a child, Rodrigo-Brenni said “I loved my chemistry classes at DVC, but since I also loved biology, I decided to put the two together and major in biochemistry.”

She majored in biochemistry at UC Davis, attending from 1999 to 2001 and earning a Bachelor of Science. She then went on to the University of California at San Francisco, where she studied from the fall of 2003 until the summer of 2009, earning a PhD in cell biology.

While at UCSF, Rodrigo-Brenni was a National Science Foundation Fellow and worked in the laboratory of UCSF cell biologist David Morgan, PhD, researching the secrets of cell cycle control.

“I like the fact that at UCSF, the top scientists and the graduate students are more like colleagues,” she said. “I felt okay going up to any professor and asking a question.”

And question she did, because that’s what scientists do. “I want to be a principal investigator someday,” Rodrigo-Brenni said. “I want to have my own lab, study cell biology, teach, and do the whole academic thing. I don’t like working on whole organisms so much, although when I was growing up, I always liked playing with bugs. I still do.”

Although Rodrigo-Brenni likes to research, she also wants to share her love of science with others. She was an eager recruit for UCSF’s Science and Health Education Partnership (SEP), a collaboration between UCSF scientists and the San Francisco Unified School District that brings scientists and educators together in the classroom. Being bilingual made her the logical choice to help teach classes on cells and systems to fourth- and fifth-graders in one of San Francisco’s bilingual elementary schools.

Her biggest thrill was knowing that she had penetrated the brain matter of fifth-graders.

“We had to explain fairly complex topics, and when they asked us insightful questions that were right on the money, we knew that they had understood and could carry on with the knowledge themselves. That was the best part. They were excited about the science.”

While at UCSF, Rodrigo-Brenni became acquainted with the Fundacion Ciencia para la Vida, a nonprofit organization in Chile that hosts an annual scientific exchange program.

In the fall of 2006, Rodrigo-Brenni joined a group of 22 fellow UCSF graduate students and three members of the UCSF faculty in that exchange program to Chile, where they worked with a SEP module at a school in one of Santiago’s poorest neighborhoods. Rodrigo-Brenni participated in the program again in 2007 and 2009, bringing more UCSF students with her.

Now, after returning to UCSF and completing her doctorate, Rodrigo-Brenni is back in Santiago, Chile as a postdoctoral fellow at Fundacion Ciencia para la Vida, where she will spend a year.

After that, she said, “I have accepted a postdoctoral fellowship in the laboratory of Dr. Hedge at the National Institute of Health in Bethesda, MD. I hope to become an academic researcher in the future. I would like to inspire minority students to pursue a career in the sciences.”

That’s not so different a goal from the professors at Diablo Valley College.