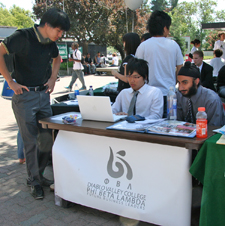 Approximately 200 students attended the conference, including those from UC Berkeley, UC Riverside, Cal State Fullerton, and UC San Diego. DVC’s chapter was recognized as the largest in California. Among those attending from DVC were Joyce Kwok, chapter president, and Liz Cabiles, one of the advisers. Claudia Eckelmann is the co-adviser.

The San Francisco event, organized by Phi Beta Lambda California, is a leadership development experience held for chapter officers, members with leadership potential, and chapter advisers. It is planned and hosted by the state officers and state management team.

One of the highlights of the conference is a case study competition, and this year’s theme was business ethics. The competition presented an ethical dilemma faced by Cadbury, a chocolate manufacturer, regarding the issue of child labor in Cote d’Ivoire. Competition participants were given the unique historical and cultural background of Cadbury, as well as information on international efforts to deal with child labor, and then were asked to advise the company’s Board of Directors on whether Cadbury should take a unilateral approach to solving the problem, or work with other chocolate manufacturers and government organizations.

Other sessions include motivational general sessions, workshops presented by state leaders, and training delivered by professions from the business community. The conference also provides a great networking opportunity for participants to form connections with business students and professors from other colleges.

Included among this fall’s workshops were “Practical Entrepreneurship,” “The Economy of the Future,” “Networking Isn’t Work,” “Identifying Yourself for Your Future Career,” and “Why You Don’t Have Your Dream Job.”