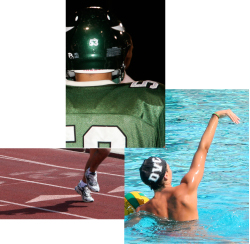 DVC athletic teams have had an impressive fall season, and three of the teams competed in post-season play.

The Vikings football team, coached by Mike Darr, had an 8-2 record overall, and was 4-1 in conference play. The team was invited to play in the Graffiti Bowl at Modesto Junior College vs Modesto.

The DVC men’s water polo team, coached by John Roemer, competed in the NorCal championships at American River College, and continued into the state championship semi-final series in November.

At the NorCal championships, the team advanced to the state level, with the competition held in Fresno. The entire women’s team and two men qualified for state.

The women’s cross country team finished third in the conference, placed eighth at the NorCal meet, and advances to the state meet. Chelsea Thommes, tenth, and Beth Ann Humphrety, 14th, were named to the all-conference first team.

From the men’s cross country team, Julian Corona and Derek Burgstaller advance to the state meet as individual participants.