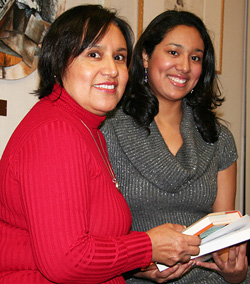 Rosaura and Teresa Ramirez of Moraga are mother and daughter who both attended Diablo Valley College, both earned degrees there, and both transferred to UC Berkeley, where they currently are students.

Aside from being family, they are like any other college students, with their own majors, their own plans and dreams. Although they started at DVC almost 10 years apart, they finished pretty much at the same time.

Rosaura, the mother, was born and raised in Mexico City, where she attended National Preparatory #6, part of the largest public University in Mexico. She was one term short of graduating when she came to California (Moraga) to marry her fiancé, Roberto Ramirez Jr.

“When I came to the United States, I took ESL at the Lafayette Methodist Church in Lafayette, at the Mount Diablo Adult Learner Center in Concord, and at the Acalanes Adult Center,” Rosaura said. She finally enrolled at Diablo Valley College in the spring of 1988, but had to drop out because she was pregnant with her youngest daughter, Teresa, and developed medical complications.

She later went to beauty college and earned a cosmetologist diploma. “This education gave me the opportunity of working part time, taking care of my family, and allowing me to take evening classes,” Rosaura said. “But I always wanted to finish my education and become a teacher. After working for a while and being a volunteer in my daughter’s elementary school, I realized that I needed to fulfill my dream of becoming a teacher. So I enrolled at DVC.”

Rosaura enrolled again at DVC in the fall of 1998, because it was close to home and because of the school’s reputation. “At the beginning I took only one class per term,” she said, “and I took different classes until I realized that I could attend a four-year college.”

DVC was a good choice for her, she said, because “all my classes helped me to feel less scared of Berkeley’s expectations. My English professor, John Drinnon, and history professors Manuel Gonsalves and Dr. Kent Haldan allowed me to read different books to understand the material and to be able to write critical essays.”

Rosaura finished her DVC studies in the summer of 2009, earning an Associate in Arts degree and a Certificate of Completion in Spanish, as well as an Associate Teacher Certificate in Early Childhood Education.

Teresa Ramirez, the daughter, was born and raised in Moraga, graduating from Campolindo High School in 2006. She knew she would go to college, and enrolled at DVC in the fall of 2006.

“My parents have always stressed the importance of getting a good education,” Teresa said, “and it’s especially true now, as it’s very difficult to get a good job without a college degree.”

Did her mother encourage her to go to DVC?

“Teresa came to DVC by her own choice,” Rosaura said. “I started at DVC long before Teresa finished high school. But I always told her how much I enjoyed my history classes with Dr. Kent Haldan and my psychology class with Ms. Jill Mason. She took classes with both of them.”

Teresa said she chose DVC “because of the good reputation it had for a community college. Even though I could have chosen another community college,” she said, “DVC was closer to home, and it had the best reputation for students transferring to a four-year college. I had also heard from other people that they had known people to go to DVC and then get into really good universities. So, if you didn’t get into the school you wanted to get into during high school, you had a good shot of getting in after completing community college at DVC. Plus, DVC has always had a very high rate of students transferring to UC Berkeley after finishing at DVC.”

Teresa earned an AA degree in Transfer Studies IGETC in Spring 2009. She actually continued taking classes during fall 2009 at DVC, finishing a prerequisite for her media studies major at UC Berkeley, since all the classes at Berkeley were full.

How did DVC help her?

“By taking various classes with different professors (two of them former UC Berkeley professors),” Teresa said, “I was able to learn how to study and retain information from their various teaching methods. I remember, though, that at certain points I wondered how I would be able to compete with the other students at university, since they would know so much more. But I realized that most of the professors at DVC are very well qualified on their teaching subjects, and want to prepare their students as much as another student at a university.”

During her first two semesters at DVC, Teresa was also in the Puente program, which teaches students better writing skills and helps them to improve their leadership skills.

“Not only did I have a great English professor, Mr. Patrick Leong, but I also had a great support team along the way. Our counselor for the cycle, Rita Delgado, encouraged me to pursue my desire of majoring in film, and through Puente I looked into various activities that would allow me to get a more in-depth look at film making. That summer I attended the Digital Media Academy that was held (for one week) at Stanford University. (I have to say that even though I love UC Berkeley, I considered applying to Stanford; they have a beautiful campus and are a fantastic school.) I also went up to California’s state capitol with two other Puentistas and other programs, such as Mesa, to talk to state senators about keeping programs like these in schools for students.”

The Puente program also encourages its students to apply for scholarships, so, Teresa said, “During the spring term we spent a whole month looking at applications and applying for them through DVC’s scholarship program. I later won the DVC Foundation scholarship twice, in 2007 and in 2009.

“Puente also provides mentors for its students,” Teresa continued, “and I was fortunate enough to get a great mentor who is currently in charge of DVC’s scholarship program (Leslie Mills). I still like to keep in touch with her.

“By involving myself in [the Puente] program, I was able to hear about other students’ experiences and their lives, allowing me to get more motivation to do well in school.

“Puente also encourages students to volunteer in their communities, and I helped with a kindergarten class at an elementary school in Concord,” Teresa continued. “I have always enjoyed working with little children, and I was able to see how elementary schools are surviving with budget cuts and faster time schedules to teach their students. I later continued this by volunteering at an elementary school in Berkeley through an Education class. It is such a good feeling knowing that you might be helping five- and six-year-olds learn their ABCs and numbers. One of Puente’s three goals is getting its graduates to come back to the community as mentors and leaders of future generations, and I hope to be able to help local schools wherever I am because education is such a necessity now. I will definitely be helping at Diablo Valley College because, after all, without DVC I might not be where I am today!”

Rosaura and Teresa started applying at four-year colleges about the same time, and both chose and were accepted at UC Berkeley. Teresa now lives on campus. She is majoring in Media Studies, and will finish her degree in the spring of 2011. She then plans to go to graduate school, hopefully in southern California, and hopes to become a film producer. “I would really like to attend USC School of Cinematic Arts: the Peter Stark Producing Program or the USC Annenberg School for Communication.”

Her mother, Rosaura, is majoring in Spanish, and also should complete her degree in the spring of 2011. She then hopes to find a job as a Spanish teacher, or may go to graduate school.

While the two never had any classes together at DVC, the closest they came was at UC Berkeley, when they both took a Field Studies course in education that required them to volunteer at schools. They both volunteered at Le Comte Elementary School in Berkeley, but were there at different times and on different days.

“People always ask my mom or me if it is strange attending the same school with one another. Berkeley is a pretty big campus, and it’s not as if I’ll turn around the corner and find myself running into my mom,” Teresa said. “But having my mom attend Berkeley does have its advantages. Since I live on campus, I tell her about the good places to eat and which places to avoid. If we want to catch up, we go grab some frozen yogurt or something and meet someplace on campus.

“Even though I have my friends and roommates, it’s nice knowing that I have another person who will listen to me talk about classes, upcoming exams, and various other things,” she continued. “Plus, it’s an extra bonus that person is my mom, who I know will always give me a hug and tell me that everything is going to be okay, because she knows exactly what I’m going through!”

Would these two DVC graduates recommend DVC to others?

“Since I am a cosmetologist, church and school volunteer,” Rosaura said, “people know that I am a Berkeley student thanks to the preparation that DVC gave me. Thus I strongly recommend Diablo Valley College for the quality of the professor’ qualifications and dedication to their students.”

“I would recommend DVC to others because it is a really great school,” Teresa said. “Not only does it prepare you for your future goals, but [the people there] really instill a great deal of motivation for their students to succeed. Many people believe that community college does not prepare you well enough or that the classes are too easy. This really shows others that you not only graduated from a community college, but also that [the community college] helps students to attend a good four-year university. Also, by having yourself surrounded by other students, you realize that you are not alone in your journey and you get to meet interesting and new people who help you succeed along the way. I have met many people who I am sure have impacted my life in some way and helped me to become the person that I am today.”